We lost a supporting cast member of the Hefferblog this week.

This frequent, if unmentioned, Hefferblog guest never received a pseudonym. We simply called her "The Pilot.

The Pilot has made numerous appearances in this blog. Most of the photos feature it's backside.


In the last few years, the Pilot became the "go to" car for cycling events because we could fit four bikes in the back and still have seating for four people.
Other appearances featured the inside of the Pilot.
But the Pilot did more than cart around heffers and their bikes. The primary purpose of bringing the Pilot into our lives back in 2003 was to cart kids around.

Certainly, the Pilot has gotten us to early morning races
Many have slept in the Pilot 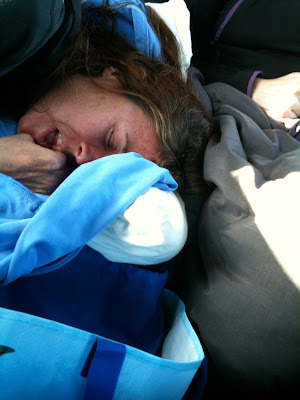 And mostly, we (my family, my friends) have had many, many, many adventures in the Pilot
Recently, the Pilot started having some mechanical problems, with almost 120,000 miles on it, that's not too surprising. The night of REO Speedwagon, we had to call AAA to charge a way-dead battery, about a week ago, our mechanic told us we needed to replace the engine mount. We wondered if the $700-$1000 repairs would start to become more frequent occurrences, so we decided to trade it in on a newer car...maybe one with some more "modern" features.

So, as we cleared out the back of the Pilot, looked under the seats, dug through the nooks and crannies to make sure that we weren't leaving anything of value behind, I admit, I got a little teary. I mean, I was ready to trade it in for a newer model, but still...that darn car held a whole LOT of good memories...
So long old friend. It was really one good ride!
Seriously Submitted by Aka Alice at 10:51 AM 4 comments:

Wow...  Only 22 posts last year. I don't have anything really to say about that other than, I am still hanging onto this blog anyway. I'm not sure why. I guess I am afraid of losing the mojo that came along with starting it. People who have met me in the last five years are surprised to hear me talk about my life before blogging/running. They assume that because I run, ride, workout now, it's always been that way. Nothing, of course, could be further from the truth, so like a baseball player who is reticent to give up his lucky bat for fear of losing the ability to hit a ball, I am unlikely to give up my "lucky blog" for fear of being sloth-like again.

That being said, I was really flattered over the weekend when one of my young cousins, who has started running called me to ask me (the family running expert!) for advise about her shin splints (yeah, if there's something I can give advice about, it's running injuries!)

So, it's January again. Five years ago, I started writing about my adventures with the herd as we embarked upon running our first (and so far only) marathon. To be honest, the last 4 years, I've been pretty much going non-stop. This year, I really slowed it down. A LOT. This past year, I ran in only THREE (3) organized races, but set a PR in two of them (the Carlsbad 1/2 Marathon last January, and the SuperRun 10K in February. Most of the year was somehow dedicated to cycling. Betty, Mik and I rode in four organized rides including the Bike the Coast Century in November. Elsie decided that riding was not for her, and sold her bike. Wilma joined us occasionally.

I'm not sure about this cycling thing. Betty loves riding, but I'm sorta MEH about it, especially the longer distances and especially THE HILLS (hate 'em). It takes a long time to ride a bike 100 miles, and even longer to train for it. I'll continue to ride this year, but I'm not sure I'll do another century for awhile.

That being said, we are looking into again doing the  Senorita Century (the 60 mile course) in March, because I almost NEVER mean it when I say, "I won't do THAT again!"

I've also been working out with a personal trainer since June, which I've rather enjoyed. I certainly enjoy seeing something that resembles arm and/or (gasp) stomach muscles. If I were to have a resolution for the new year, it would be to have some mad ab musclez... and to have calves that are thin enough so that I can wear boots.

I feel like I'm sort of stuck in a place right now where I'm not sure what my next big goal should be. This leaves me feeling a little disconcerted. Since it is January, I have joined the San Diego Track Club's Rockin' and Runnin' program again. Right now, several of us (Betty, Mik, Elsie, and Edith (!!)) are signed up for the San Diego Half Marathon in March, which is the week after the Senorita Century. So March is also looking to be a pretty crazy month.

I keep thinking that maybe I'll run another marathon this year, but we'll see. I am pretty sure I won't be able to convince anyone other than BBJ to run it with me.

I also think about blogging regularly again. My biggest regret for 2012 is that I didn't blog enough. Instead, I put together an end of year slide show for the herd. It's long (about 12 minutes), but it definitely highlights some of the adventures this past year. I'm not sure if the audio will work... if you want the original slide show, click on this link to my dropbox account public folder. (It may take awhile to download...it's a huge file!)

Seriously Submitted by Aka Alice at 9:47 AM 3 comments: