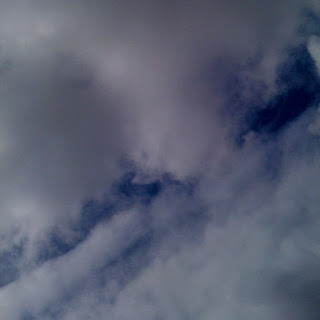 Wow, what a difference a week makes. Ran this morning at Lake BP. Unlike last Sunday's debacle, this morning was lovely. Light clouds, fall sun...not the sort of sun that sucks all of the energy out of me, but the kind of happy-fall sun that smiles at me happily. (Note to anyone who doesn't live in so-Cal...Summers are often foggy and cool, especially at the beach. October really is the BEST month to visit).

Of course, my intention this morning was to run only one "lap" at Lake BP and not two, so that also made it a better run. I'm planning on doing the last long run tomorrow morning. This morning, I needed a good run and I ran the crap out of it too...

So, that was the good news. The bad news is that I'd sent Betty a text the night before that I'd be at Lake BP at 7:30ish. Care to guess what time I dragged my sorry ass out of bed? 8am...GAH! Checked my cell phone & saw that I had a return text from Betty at 6:40 and a phone call from her at 7:38 (probably to say where the "F"are you?). Gah! Sorry Betty.

We did run into each other when I showed up at Lake BP at 8:45ish...but she was done running at that point

So, nice run this morning...even though I am a loser friend.

I did appreciate running with the cloud cover...and there were lots of interesting people walking and running at Lake BP, including one couple who were geo-caching...which I know about because I've done it before. I really wanted to ask the couple, as they traipsed through the brush, if they'd found their treasure yet...

In other news this weekend, last night Walter and I took DramaGirl and a friend of hers to Octoberfest...an event that, quite frankly, I just don't get. It's an unbelievably crowded street fair with 100's of street fair vendors selling the usual crap...in addition to some food vendors who sell bratwurst. In past years, there was a pretty good beer garden with an Oompah Band and people doing the Chicken Dance and all that, but this year, apparently, the beer garden was much smaller...which drove the crowds into the street fair and (probably) the downtown restaurants and street-food vendors.

Not that we were venturing into beer gardens last night, as our purpose was to escort 13-year old DramaGirl and friend who begged us to take them to Octoberfest. I was pretty surprised they wanted to go. It really isn't much of a kid, or even teen-friendly event...other than there are other teens hanging out there...AND there really weren't even that many of those. My "I'll make the best of it" attitude lasted about the first 42 minutes...then declined from there...especially when DramaGirl and friend decided they just had to go on cheesy, low-budget, carnival rides (there were three).

Of course, DramaGirl and friend just really didn't even want to be with us to begin with, but that wasn't an option. Call me an overprotective ninny-mom, but I'm just not ready to let my 13 year old and a friend roam the streets of the downtown area when there are 50,000 people (I don't think I'm exaggerating by the way), roaming about...and a trolley nearby. 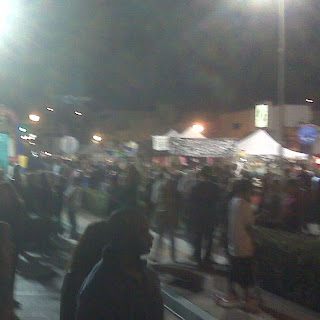 Really crappy picture taken of the crowd with Walter's Blackberry, cuz I forgot my iPhone and camera at home...GAH!

Tomorrow morning is the last "long run" before the Nike Women's 1/2 (only 14 days away!) unless I figure out a way to get up to Long Beach for that 1/2 marathon next weekend (I'm still working on the details Southbay Girl). Edith and I have a good one planned with two loops that include 6th avenue...(da da da daaaaaaaa).

Seriously Submitted by Aka Alice at 2:28 PM