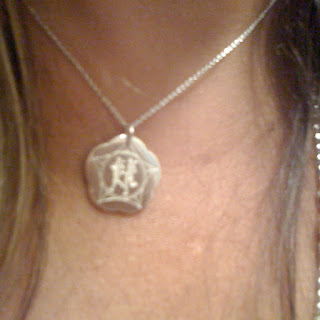 The Bling
I'm still basking in the after-glow of the Nike Women's 1/2 Marathon. I think it may be the first long race I've ever run well. Maybe that's because I've run enough races and long runs and now I know how my body is going to react, when I can push myself, when I need to ease off...or maybe it was just not having to run in the heat (because it really was NOT hot), or maybe it was some of the residual hill training...
Maybe it was that San Francisco is just an entertaining place to run.
Maybe it was running with all the chicas.
But it WAS MY BEST 1/2 MARY EVAH...(the afterglow, really it lingers...)
But before I get to the race, I do need to recap two events that occurred the day before we even got to the start line...both of which involve Edith.
First, she calls me from her room in a state of semi panic asking me if I got my bib when I checked in. The conversations went something like this:
Edith: Hey, when you checked in, did they give you your bib?
Me: (thinking WTF?) Yeah? I got a bib. It was in the bag.
Edith: Really? Shiz, I don't think I have one. I'm going to go back down and tell them they forgot to give me one.
So she goes back to the Expo again, convinces the bib-volunteer dude that she did NOT get a bib in her bag (although she does have a shoe tag), he gives her one, she get's back to the room, calls me and... 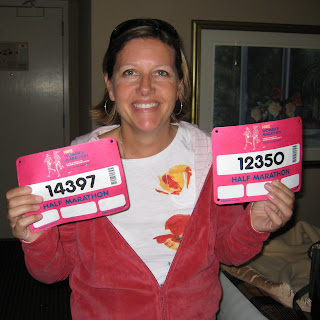 Are you ever just a little bit worried that we are teachers?
So, of course, Edith being the ethical person that she is decides to NOT put up the second bib on Craig's List, and returns it to the Nike Expo Tent (yes, it was my fifth, count 'em, fifth time in the expo tent!) because she'd bet the Nike Volunteer a dollar that she had NOT received a bib in her bag...so she paid up. 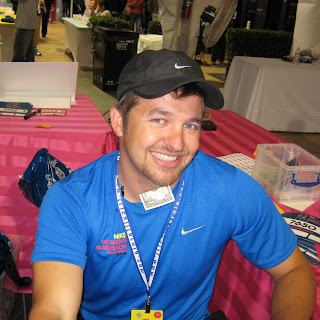 Bib-volunteer dude with his winnings
Then...after two days of completely beautiful SF weather on Friday and Saturday, Saturday evening started to get colder and the morning promised to be even colder still, so Edith decided that although she had intially planned to wear shorts, she really needed a pair of capris to run in. Soooo back to NikeTown we went AGAIN. I had completely lost count of how many times I'd been in there (maybe five or six times...there were salespeople who started to recognize us...sorta like Norm in Cheers). In fact, Edith and I had already been in there once earlier in the day and they were out of the really cool "Shop Like A Girl" bags that you would get if you spent over $125. Edith spent well over that, but since they were out, didn't get one. So on our way out of the store, I got the security guard who was standing by the front door to take one off one of the displays (I figured the manniquin wasn't REALLY using the bag). It took three walkie-talkie calls to get someone in "visuals" to give permission to take the bag... I think it also started a minor stampede toward the other last-remaining bag on display, but we left (quickly)...

That night, we had to get the salesperson undress a manniquin so that Edith could have the last size small capris left in the store. 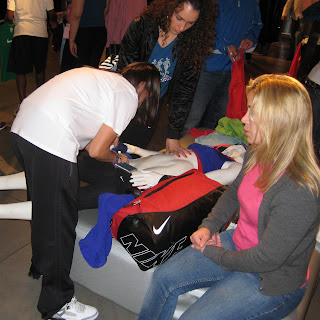 It took two lovely Nike salespeople to disrobe the display. 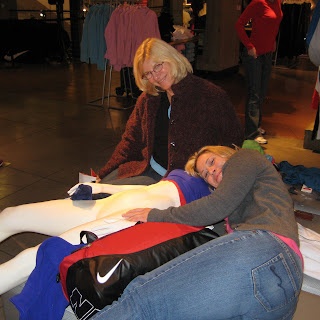 Finally, we went to bed because we were up EARLY for the race...and the weathermen were correct. It was COLD. I was glad that we ended up staying at the Hyatt Grand and were less than a block from the start because it was beyond crowded, but everyone was calm and unbelievably polite. There was a little confusion when we were checking in our bags (not enough direction) at the bag-check school buses and I managed to get myself separated from the rest of my herd, but luckily there are cell phones and we found each other. 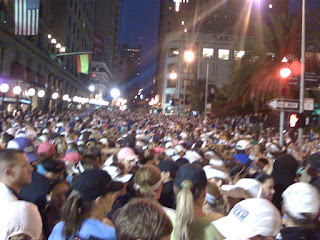 Those who started running in front of me 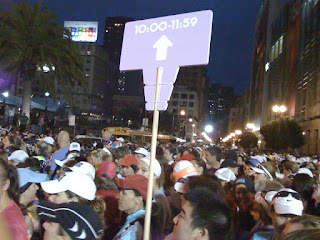 Those who started running with me 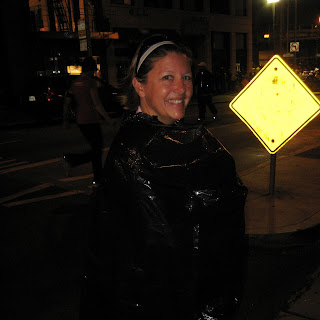 Edith in the disposible part of her warm-wear 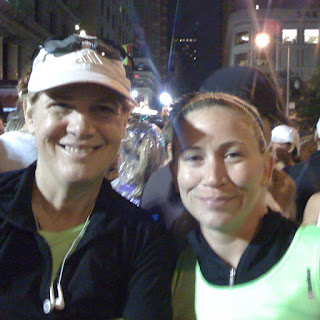 Elsie and Alberta, before the race...We are ready! 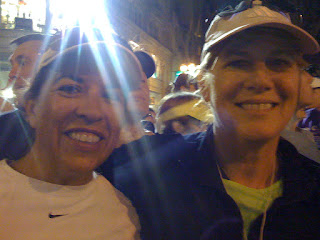 Me and Elsie...I'm also ready...although I don't look quite awake yet.

As for the race...I have nothing but happy memories of it, including the hill parts. Here's the rundown (which I'm going to do in 5K splits)

Start to 5K - An easy wave start to the race. I was surprised that I started running right away because of the wave start. What a great way to start a race. There was none of that run, and then walk, and then run, and then walk to start the race (when you start at the back of the pack, this is often how it is) Edith, Elsie and I pretty much ran together the first 3 miles. (Edith left us before the race to run with the faster pace group). The first two miles were pretty much downhill and easy. I actually ran by the first water station because I was distracted by a building, didn't notice that I'd run past the last water table, and decided to not cross in front of 30 people, and double back...although I was surprised that in a race of this size they didn't have water on both sides of the street. Luckily, it was a cool morning, so I just skipped it and figured I'd get water at Mile 4. Alberta and I checked our watches at the 3 mile mark and were happy that we were pretty much on pace.

5K to 10K - Around mile 4, I realized I had a little pebble or something in my shoe, which was a bummer, but I didn't want to stop to take it out, so I just kept kicking it to the tip of my shoe...sort of annoying. There was a steep, but really short hill around mile 5, which Alberta and I ran up without too much problem. As we crossed the 10K mat, we could see the first big hill which headed into Precido Park. There was also a foot massage station around Mile 6. I wonder, who stops for a foot massage in a race?

10K to 15K - Yikes...the hills. They were steep, steeper than 6th Avenue, and looooonnnnngggg, but I felt like I'm doing OK. The worst part was that the path was pretty NARROW and lots of people were walking. It was frustrating (not to mention exhausting) trying to jockey and navigate around walkers as I was also trying to run uphill (GAH!!!). At one point I was able to follow a woman who was wearing some incredibly small, bright red, skin-tight boy-short-looking brief, and who was also cutting quite a path. This got me up the first part of the hill, and part of the second, but then I got separated from her. This was the most dissappointing part of the race for me, even though I did pretty well. I ended up walking one time, just because I was behind a WALL OF WALKERS and there was no way to get around them.

Once we got through the park, there was a pretty long run downhill which went into a really (REALLY) nice neighborhood, but my overwhelming thought at the time was how badly I was probably burning my quads because I was trying to run fast and pick up some of the time I knew I'd lost on the hills.

15K to end - There's one more hill around mile 9 after we ran out of the nice neighborhood and into a less-nice neighborhood, but then we got to run around one more corner (I was still kicking the rock in the shoe) and down one last hill. This one took us to the coast in Pacifica, past The Cliff House restaurant. It must have been cold because we could see our breath as we ran, and my fingers were also getting cold, but I was still running and as I passed the 10 mile mark at the bottom of the hill, I could barely believe my watch which indicted that I was under two hours (1:55). I start believing that I might be able to finish in under 2:30, but only if I picked up my pace.

Because I was having some serious conversations with myself about whether or not it was too early to pick up my pace, or how hard I should run, and when, I missed seeing the Bison...which makes me a little sad. I'm told they were in the Golden Gate Park, but I didn't see them. Like I said, I was busy convincing myself that I could run 10 minute miles for miles 10, 11, 12 & that pesky last 10th of a mile.

As we ran out of the park, I grabbed some Ghiradelli chocolate from one of the last aid stations and pocketed it for later (who can eat chocolate while they run? I'd just get ill) as I headed into the last mile (all downhill...wheeeee!), and I just tried to run as hard as I could. As I crossed the finish line, I knew I was close to 2:30, but I'm also focused on this: 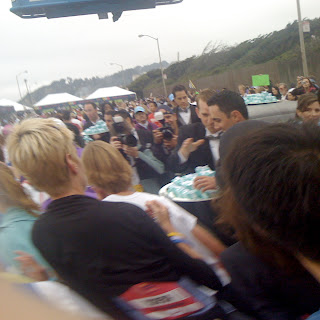 I didn't know (of course) at the time that I'd come in under 2:30 (just barely, but I'll take it), but I was deliriously happy as I took my Tiffany necklace from the cute firefighter in his tux, and the mylar blanket (because sweet Jesus it was COLD), and a banana (which I never ate), a water (which I needed) and a smoothie (which I didn't drink) and a bagel (which I put in the Tiffany bag). There was just a TON of stuff being thrust my way. I could have also taken granola, and lord knows what other food they had at the end of the race. I was sorta interested in some chocolate milk, but didn't see any. I also saw my friend Maurice and she hugged me (brave friend)...more lines, nice finishers t-shirt...another line and I make my way to the "H" area, which is where the herd (get it?) agreed to meet.

Although we are standing about five feet from each other, Edith and I yelled at each other on the phone for a couple of minutes shouting, "do you see me yet?" We find each other, grabbed our gear off the bus. I changed between two of the school buses that were doubling as gear check points using the mylar blanket (SoCal Beach Skills in use) as a wrap. Even though it was a little chilly, this SoCal girl still put on the flip-flops (soo happy to be out of the shoes)

We eventually found each other, got on a shuttle bus, and headed back to the hotel...all of us happy, happy, happy. 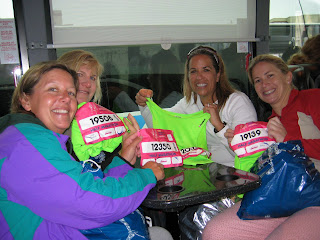 Shuttle ride home (yes, there was a table on the bus)...and the lime green shirts!
After that, of course, were hot showers, and then LUNCH!!! 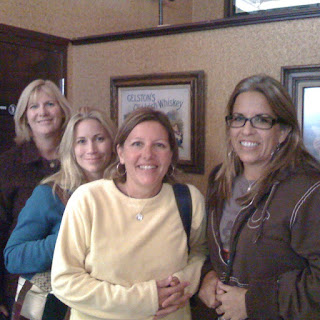 After feeding our bellies with beer, Bloody Mary's and Burgers...happy, happy, happy. then we went back to the hotel room and napped until Betty called to tell us she missed us (and we missed her too!)
Here are the official times for the rest of the herd.
Alberta - 2:37:08
Edith - 2:06:26
Elsie - 2:46:58 (with a headcold!)

Again, a great day, a really nice race, a great weekend. I'm already registered for the Carlsbad 1/2 Marathon in January...it's a nice, flat course. I'm thinking I could get close to 2:20...

I'll definitely be in the lottery for this race again next year. It was that much fun!
Seriously Submitted by Aka Alice at 11:46 PM