Best and Worst...There's One Thing I Won't Miss... 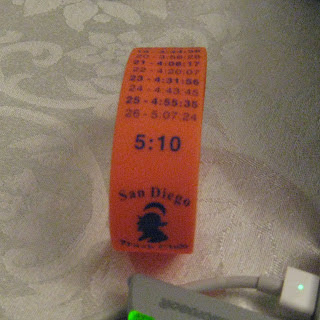 Turbo thinks I should be able to do it...no problema... Of course, his next comment was something like, "That should be easy, can't you run a 10 minute mile mom?"

I thought for a little while on Friday, that our last training run would be the perfect bookend to the first in the pouring rain, but the weather held...it alternated between being perfect, or too hot near the smelly marsh on the north side of Crown Point (bacterial decay according to Elsie), or to too cold and windy at Hospitality Point.

Then after the run, BBJ, Mik, Elsie and I took an oath. It went something like...

I, state your name, do solemnly swear (I promise that we all managed to actually state our names, rather than doing the Animal House, "state your name" joke...but only because Paul warned us not to...) ...then we promised to do our best, to have fun, and that we were already winners...something like that...hard to remember because by that point it was incredibly cold and windy and it wasn't much fun standing around in sweaty-wet clothes.

If you weren't there, you should take the oath now...

I got to thinking during this weekend's run about some of my favorite and not so favorite moments in this training season. It was brought on by a herd of 6-minute milers roaring past me about an hour into the hour and a half, out-and-back, taper that we did from Hospitality Point to Crown Point and back...8 miles in an hour and a half...thank you very much....

Anyway, there were Elsie and I, just trucking along after about 5 1/2 miles. I won't speak for Elsie, but I was feeling pretty good...we'd been running more than 5 miles, I was not dying, and I wasn't having any serious conversations with any of my body parts... and then they roar past with such ease (talking and laughing), and I couldn't help but be a little envious because I know that no matter how long I run, or how hard I train, I won't ever run like that, so I found myself thinking... 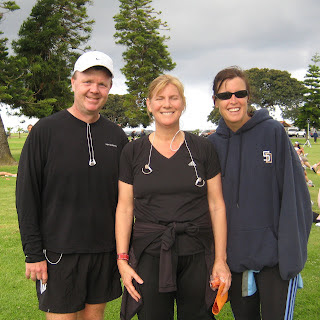 Which, of course, led me to think about other things that I would and would not miss about training. So, since it's the season of awards, I thought that I'd start our first (and probably only) annual heffer-RnR-training awards (I think we should call them The Mabels). So here are some of my nominations.

I really liked the two runs in Coronado...even though I got lost once. I also think it was the start of me thinking I could actually run long distances, and one of them included the first interaction with Elvis.

My nomination would have to go to Torrey Pines...the heat, the hills, the sand, my shoes...I hated all of it. 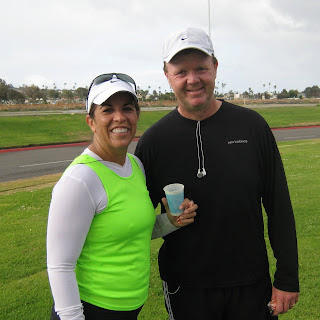 On all of the out and back runs, my favorite moments were seeing the rest of the herd whenever we'd turn around. You all kept me going.

I especially wanted to thank BBJ for not passing by me too quickly this weekend. I almost kept up with you for awhile.

Ah geez...I think the couple of miles going through the awful streets of Leukadia (and taking a wrong turn, and missing a water station) on the train run were the worst for me.

A close second would have to go to all of the times I twisted my ankle running through and around the pot-holes and divots in the street around Marina Village.

Golly, there have been so many...was it when Betty had her shorts on backward? or when Elsie yelled out that it was all about the tight ass? Betty's experience with Dear Jesus? BBJ introducing us to the idea of bloody nipples? Mik being smarter than us and running her own course? Edith's new relationship with Purple? Alberta spending her time in bed with the Do it Yourself Network? Me, admitting what I did with the map. There are far too many to chose just one.

Of course, there's the woman who was hit by the biker...which was just horrible...but as far as our training goes, all of my least favorite moments were on the Torrey Pines Run...and all of them were tempered by the fact that I saw you all afterward, and then Betty and I got to talk about Bones and Leather Nipples...so it was all better after that.

Many of you have told me that you enjoyed the blog in which I was trying to convince my various body parts to continue running during the 20 mile run. I had a lot of fun writing that blog, but my personal all time favorite is probably the iPhone incident blog...mostly because if not for that incident, I may have never really continued with the blog thing in such earnest.

Probably all my rants about testing. Yuk...

Golly, there are so many of them, but I think we'd all agree that the Sephora face wipes are THE BEST!

For me, in second place are the injinji toe socks. I know its a weird idea, but I haven't had a single blister since I started using them.

Gosh, I hate to admit, especially on a blog that Walter reads, that I EVER WASTE MONEY ON ANYTHING...but I ordered the Amphipod Running Pack, because, as you all know I can never have enough pockets, but Betty took one look at it and noted that she thought it looked like it would case some serious chafing...which it did...

OK...so these are my nominations. I'm sure you have yours and I want you to share them as well, including any additional award categories you want. What were your favorite/least favorite things about training since January?

By the way, feel free to share your favorite/least favorites even if you've been training vicariously!

Only five more days folks... I can hardly believe it.

Seriously Submitted by Aka Alice at 12:35 PM