This morning Mik, Elsie, BBJ and Kat and yours truly were the herd members who ran at the Sue Krenn 15K, not a typical distance for a race, but the track club uses it as one of the Marathon training program runs. It's a pretty flat race that starts on East Mission Bay drive, does one loop around Fiesta Island (big news is that there was almost NO WIND as we ran on the Island this morning, which is a pretty big deal), then runners head back onto the running/walking path alongside Mission Bay Park for a couple of miles, then the turnaround to the finish.


It's a pretty small field. The starter started the race by ringing a cowbell. My biggest complaint about the race is that the mile markers seem to be just randomly placed in an area near the mile they are marking. That and the first aid station is about 3.5 miles into the race, but I've run this race three years in a row, so I'm mentally ready for it now. In the past I was more like "WTF is the aid station?" Also, in past years, it's been much warmer than it was this morning.  This morning is what I would call Perfect Penny Weather...cloudy and cool. 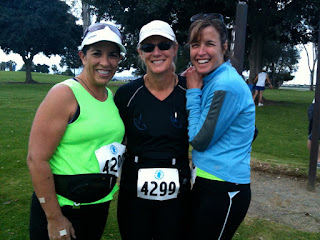 Me, Elsie and Mik before the run...Mik said she was cold. I started off with a long sleeve shirt under the day-glo green, but removed it after the warmup. I was glad I did. Note the missing nosepiece on my sunglasses...yep, lost it this morning. GAH! Hopefully, Nike can replace it.
There were some random conversations bits that took place before and after the race. Out of context, they all sound dirty, but in the context of running, quite normal. In fact, the first two don't even need any clarification. I did have to promise a certain tall, male, who runs in black, and who teaches Math, that I wouldn't attribute the first or second comments to him, but I have to share them anyway...

I was not expecting much from myself in this run. Since the debacle that was the Surf City 1/2 Marathon last month, I've been running only twice a week, and have been to the gym only a handful of times, so my overarching goal was just to finish and not hurt myself as I still have a 32 mile ride scheduled for tomorrow morning.

First things first...I did finish in (unofficially) my second best 15K time (1:43:29); not only that - I am thrilled to report that I ran pain free. It was not at all what I was expecting as my knee has been sorta twitchy and stiff lately (yeah, another dirty sounding line, whatever), and the 2nd half of the run is on a concrete walking path, and that always seems to bring a flare-up in the PF, but neither of those things happened today.

I knew I was doing pretty well, and my inclination when I'm feeling good and running well is to push myself too early in a race. I kept telling myself that this wasn't really my race, just a training run, and that I needed to take it easy. It was quite a challenge, especially as I knew that a PR was within sight. Apparently, it's taken me almost five years of running to learn that lesson (or at least to have actively applied the learning to actual practice...)

Here are my splits

So, to what do I credit this performance?

That's it...because a reasonable performance certainly couldn't be attributed to actual training as I've done so little of that, but I'll take it nonetheless.

After the run, we gathered at La Casita (Elsie's place) for Mimosas and pancakes. Even though Betty wasn't able to run this morning (slight stress fracture, I swear I didn't give it to her, and some other family shiz she has going on), she joined us for breakfast. We are such creatures of habit, we all have our tasks. Betty makes the pancakes; Mik gets the fruit ready; Elsie makes the coffee; I am in charge of the mimosas. We sit in the same place, every time...we are such dorks.

And I completely missed our dorkiness this month. 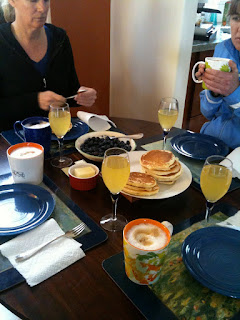 At our usual places...ready to get all caught up about each other's business...
So, it was a fine run and now I have to go take care of my bike. I wonder where I put the lube? (Another out of context dirty-comment).
_____________________________________
* The actual context of this comment: Two women were in front of Elsie and me as we picked up our bibs. One woman was telling her friend that she was the only person on her cell phone whose last name started with the letter G (oooooh...THAT G...I know what you were thinking!). Of course, once she said "G friend" we all started giggling. I saw her at about Mile 8. She hadn't yet gotten to the turnaround yet, and didn't look like she was having much fun, so I shouted out to her "HEY! G-FRIEND!" and she smiled... Just doing what I can to spread the cheer!
Seriously Submitted by Aka Alice at 12:22 PM