But first, some random notations from the week...
Only Mik, Kat and I were the only members of the herd to show up for the run this morning. Everyone else missed absolutely perfect running weather. Betty had to work. Elsie was on Grandma duty. BBJ decided to do a St. Paddy's Day 10K that included a beer garden at the end. I'm not sure where everyone else was.

There are many good things about running in Coronado, mostly there are plenty of visual distractions. We get to run under and around this... 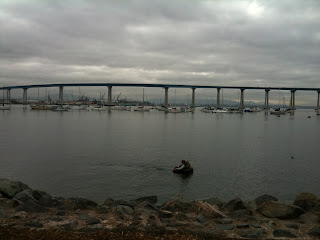 Coronado bridge, the bridge Mik and I rode OVER in the pouring rain last weekend...on a side note, the guy in the foreground was sitting in what appeared to be an inflatable lounge chair (camouflage pattern) and was fishing. BTW ocean temperature is currently about 54 degrees.
And beautiful homes like this... 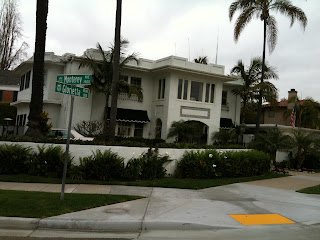 Rows of homes that I'll never live in...but nice to run by
One of the challenges of running in Coronado is that the streets have a pretty steep cant to them. I tried to find and stay on the most level part of the street, but at points it was just impossible. I felt really good through most of the run although at about the 7th mile I could feel a familiar tightening at the bottom of my left foot. I don't think it's the dreaded PF yet, but I certainly used plenty of ice when I got home.

In all honesty, I didn't start the morning thinking I would run almost 10 miles. Actually, I think I told Mik that I'd do one loop around the island (about 7 miles) and be done with it.

Problem with that is that I was finally warmed up at 7 miles. At 7 miles, I felt good enough to continue running, so I ended up running not quite 10 miles. The last 1/2 mile was pretty tough, but it felt good to get out there and run.

Other highlights of the morning included: 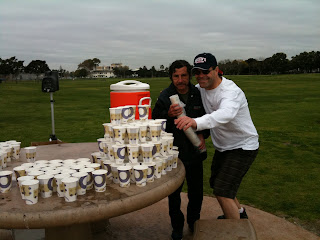 Clearly the guys waiting at the aid station had some time on their hands. I told them I really admired their fabulous display. 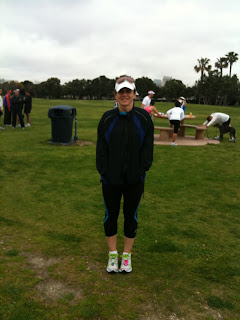 I told Irene I hadn't put a picture of her on the blog recently...Here she is in her fabulous Newtons 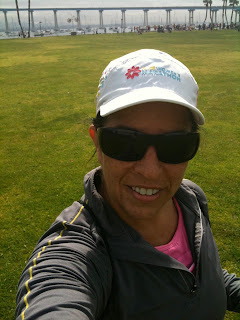 It was another great running morning - cool and comfortable during the run, then the sun came out...which was good because as stylish as these sunglasses may be, they were not stellar running glasses and stayed on my head the entire run.
My goal is to get caught up on your blogs tomorrow...but it's time for bed now.

Seriously Submitted by Aka Alice at 10:03 PM