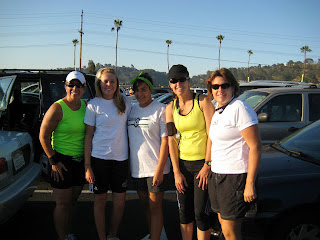 Sorry this took a day to get posted...but I'm Co-director of a teacher professional development institute this week...so I'm CRAZY BUSY!

Be that as it may, we took some time Sunday morning to run a little race. Mik, Betty, and I ran the Aflac Iron Girl 10K. We were joined by Betty's daughter and her friend who ran the 5K...all things being equal, it may have been wiser to take th 5K option.

2. Start the Race Already!
The race was supposed to start at 7:30...but the gun didn't go off until 7:45. At race time, it was nearing 80 degrees...and did I mention we were running at the Del Mar Racetrack...the place where horses usually run? And did I mention the heat? And did I mention that it was really crowded...about 3000 women ran this morning (which was undeniably cool), but still, by 7:40, I could hear Betty snarking "sing the song! sing the song! (the National Anthem)."

3. They call it Poli-Turf; I call it Poli-Crap
The race started where the "Surf Meets the Turf at Del Mar" on the horserace track... Yes, I fought the urge to NEEIIIGGGGHHHH LOUDLY, as the race started. That being said, I couldn't help but notice how many of us jockeyed for position on the rail. At least that was my strategy. I can't say enough how much I didn't particularly enjoy running on the Poli-Turf and I couldn't help but think about what happens to horses who run these things when they twist and break an ankle.

4. They Shoot Horses, Don't They?
So, last year, Del Mar was one of several tracks around the country that switched over from using a dirt track to Poli-turf, which is some kind of a synthetic dirt. Really, it was like running in loose sand. I have a whole new understanding of how race horses break ankles...and to think that somehow Poli-turf is supposed to be a safer surface for running...well for horse running anyway (be careful out there!)

6. What Would Gu Do?
OK, so there was the heat and the dirt, which no doubt negatively affected my time, but despite these things, I was moving along pretty well. At the 3 mile marker, I looked at my watch and saw 33 minutes...so I was thinking that the 2nd and 3rd mile must have been under 11 minutes (I assume the first mile, which included and the dirt was pretty slow, but my first mile often is). Thus, I thought finishing in close to an hour was within my reach, especially since I tend to run faster at the end of a race. But at about 4 miles, I was realizing the effect of the biggest mistakes I'd made in not eating and not hydrating sufficiently. Even worse, I had planned on taking a Gu with me and I forgot it...I really could have used it too...let's just say that the 4th mile was just plain ugly and I had to (gasp, shame, tears) walk...which I haven't done in a race outside the marathon in a pretty long time.

8. Chewy Gatorade & A Shower on the Course
My favorite aide station was the last one (at about 4.5 miles) when one of the volunteers just poured water from her jug over my head...so I ran the last mile and a half soaking wet. I don't know if that affected my time, but it sure felt good. I figure by that point it was getting close to 9am and Weather.com says it was nearing 90 degrees in Del Mar by then. ACK!

I really needed the salt and sugar at the Gatorade, but I'd have to agree with Betty who remarked later that she thought it was chewy.

9. A Cool Finishers Medal & Great Swag
One of my favorite things about the Iron Girl races is the extraordinarily cool finisher's medal...so now I have two...and the other swag we scored. At the end of the race, a volunteer handed me an ice cold sponge (withe the Aflac Duck on it) which I squeezed over my head (then Betty did it again...did I mention that I was soaking wet at the end of the race...I'll get to the effect of that later). Also, I managed to score a stuffed Aflac duck which when pressed says "Aflac, Aflac, AAAAFFFFLLLLAAAACCCKKK." Turbo and Drama Girl LOVE it.

10. Which Way are The Girls Pointing?
Later on we made our way to the grandstand to get our breakfast, and since we were no longer in the direct sunlight, and were up in the grandstands, it got a little cool and windy, so "The Girls" were helpful in pointing out the way to go and we all commented on how important it is to make sure that when the girls are pointing, they should be even. 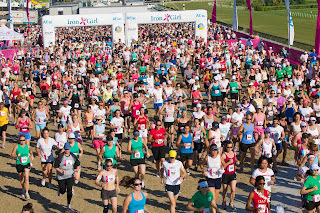 I'm reading over this now, and thinking I sound pretty whiny and snarky about the race (I've been told that twice this morning that I'm being rather snarky today...not a good sign when you're presenting to a group...), but without the snark, I'll admit that I love the Iron Girl runs, even when it's hot and I'm running on dirt. I love seeing the all the over 3000 mothers, daughters, grandmothers, girls, friends running and being strong. It really was a very good time. (See...there we are just under the Iron Girl banner...)

So, our next BIG race is the AFC 1/2 in August, but there are a couple of 5K's I want to do before then.
Seriously Submitted by Aka Alice at 2:15 PM