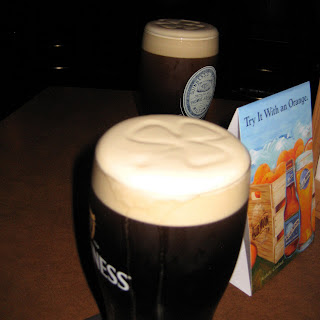 Is this a sign of the summer to come? Tuesday night track club workout followed by pints of Guinness? I'd BETTER train to run a 1/2 marathon this summer. Do you have any idea how many calories are in a pint of Guinness? (Maybe it's better if I don't tell, but...you know me, I can't help but share VALUABLE INFORMATION.)

If a pint is 16 oz (and I think it is), then according to one of my favorite calorie-counting software applications, EVER, CalorieKing, a pint is 235 calories... I don't even want to calculate the calorie count of the Greek Food...).

But isn't it pretty how the Auld Sod somehow gets the impression of a cloverleaf into the beer-foam? Pretty, pretty, beer.

So, we welcomed Mik to the Heffers last night with pints and food, but felt justified in doing so since we worked out with the track club. Betty, Edith, Mik, and I were in attendance...and we were also joined by Tall Tim! (who now has FOUR mentions in this blog, so, I went back and labeled all those entries so that he now turns up in the Things I Write About log!)... OK TT, you have to leave a comment now. It's a rule I just made up. (I mention you in the blog, you read about it, you write).

Edith would want you to.

She told me so.

Before the pints, we ran on the grass at Balboa Park. I HAAAAATE running on grass or trails. I know in that our first official run after the marathon, we were supposed to take it easy and save our legs and all that, but I felt like my legs were working twice as hard (at least) running on the grass than I ever feel running on pavement or the street. I'm also really happy that after the run, we did some extra strides and some sit-ups...my core could use the workout.

In other heffer-running and non-running news this week... 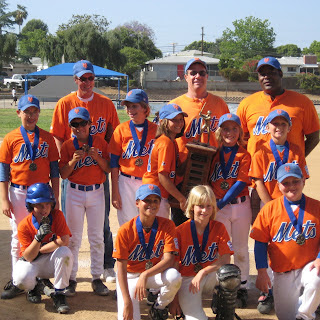 The good news is, despite my faux-pax, Walter and Turbo's team won the league championship over the weekend. An event which was a first for our family and was unbelievably cool. I'm so proud of them both.

All the boys got a medal and we get to house for the week a completely ENORMOUS trophy.

The bad news is that we now have two more weeks of baseball in front of us now.

The obvious news is that I'll never enter a baseball dugout again as long as I live (really, I'm scared of them now).

Alice
Seriously Submitted by Aka Alice at 10:18 AM