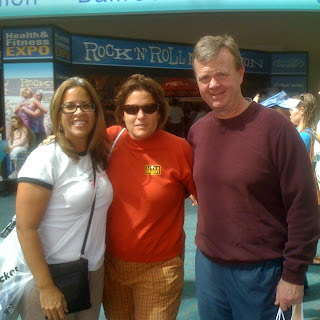 I could write all week (and I just might), but I don't think I would come close to capturing all that saw, all that made me smile, all that caused me pain, and everything else that occurred before, during, and after the Rock and Roll Marathon on Sunday. It was an absolutely amazing day. I still don't think I've processed all of it.

But before I get to the (now proclaimed) Amazing Day, I need to start with the day before the race when BBJ, Betty, and I went to the RnR Expo to get our bibs, chips, and other gear. I was glad that we got there early because by the time we left, it looked like it was going to be a zoo there as thousands of people were arriving as we were leaving. As it was, we got into the expo easily, picked up our stuff, including an awesomely large gear-check bag, which I loved, shopped around for a little while (probably nearing the threshold of BBJ's shopping limits) and left.

Betty and I did pick out some fabulous t-shirts, including the one I wore to school today that says "Toenails are for Sissies" on the front, and the one Betty wore yesterday after the race that says "This IS my Race Pace" in honor of "The Wog."

We also got these nifty running belts (although BBJ decided to NOT get his in flashy lime green to match his running shirt) called SPIbelts. Betty and I discovered this ingenious item at last summer's AFC 1/2 Marathon Expo. Somehow I lost the one I bought, and I just HAD to have another (yes, another gadget). It's a great running belt...the pocket expands to hold three or four Gu, chapstick, a free sample of HC pain spray, and two other small, shall we say, personal items. Well...that's what my SPIbelt held on race day...not sure what was in anyone else's.

After we left the expo, I thought I would spend some time relaxing...but it was not meant to be. I spent the remainder of the afternoon trying to find some sunglasses...which I finally did at Sports Authority. They weren't the really cool Oakley glasses I wanted (irony is deciding not to drive to Mission Valley to buy sunglasses because you want to save gas, then driving around to several different places "nearby," and wasting more gas than you would have if you'd just driven to the Valley.) Unfortunately, it seems that none of the sports/sunglass shops in La Mesa are cool enough to carry Oakleys, so I settled on some Bolle glasses. Drama Girl helped me pick them out...although I think she would have said that glass-bottles would have looked good on me because she is only happy when we are shopping for her.

In the other part of my life, the part that is NOT about running a marathon, I also managed to get to the end of Turbo-boy's Little League game, which his team won, so both Turbo and Walter were happy.

Then we rushed to Kim's for our carbo-load pasta dinner/potluck, where I got to enjoy all of the really yummy foods that we all brought to share. It was awesome to get together for that one last meal and laugh-fest. In many ways, I think that where it really started to hit me...Paul's line about the marathon training not being the destination, but the journey.

Finally, when I got home, I relaxed a little bit, finished obsessing about which shorts I was going to wear the next day. Pinned the most ENORMOUS race bib I've ever seen, to my lime-green shirt, tied the race chip to my shoe. Decided NOT to read the medical information brochure because the print was small and it looked boring (yes, I am an English teacher), which according to Elsie and Edith the next day was a very good choice. I put out all of my stuff (iPod, watch, sunglasses, hat) on my dresser and went to bed. Then got up at least four more times to make sure that I had everything ready for the next morning.

Lots of runners talk about how difficult it is to sleep the night before a big race, but once I settled in, I slept really solidly (maybe the wine I had at the year-end staff retirement party the night before helped).

(more about race day tomorrow)
Seriously Submitted by Aka Alice at 8:31 PM