Hair-Whips and Frolicking on the Train

You’d think running 16 miles would garner enough information to be enough to consume an entire post...but to be honest, it’s really boring...and OH MY LORD my legs, feet, and butt ache today. Actually, I want to thank the crew for showing up...it was so much more fun (for me) to have someone to run with and more importantly to have breakfast with afterward (we found the Hideaway Cafe!)

First of all, the headline. When you all see me, you’ll notice that may hair is decidedly shorter than it was on Friday (cut off 8 inches...a real 8 inches, not 1/4” = 8” as Lloyd explained to the parents the other night...to which I giggled...Men always exaggerate that way...sorry BBJ). Anyway..one of the benefits of having shorter hair is that my long hair, when pulled up in a ponytail was really starting to bug me on these longer runs because it’d get all sweaty-wet, and then it’d start whipping the back of my neck...

Hence, I told the crew on the train that I needed to get rid of my “hair-whip.” Betty thought that was funny.

Then Paul told us that when we were done running that we could frolic in the ocean at Solana Beach, which led all of us to wonder about the last time we “frolicked” and about what...hmmmm

I’m still trying to wrap my head around the enormity of running 16 miles. For me, the first 12 (or so) were fine...the last four (or once we got to Leukadia and the freeking broken streets there) were the WORST! Alberta almost fell on her face because there was a STUPID barrier-thingy lying flat on the street that she didn’t see. I rolled my foot about 10 paces later and almost twisted my ankle. Uneven surfaces, road construction guys who won’t move out your way...the pack of Team in Training Cyclists roaring by at 150 mph (ok...I may be exaggerating, but I think I was in Leukadia when the team roared  bay and it sorta freaked me out a little). I think we all agreed that Leukadia may be lovely, but it was a sucky place to run!

I was so happy to leave L, but then took a wrong turn and ended up with the pack of Paul-Groupies at the ladies room...which turned out to be down a huge hill...then we had to walk up (because it was a 45 degree incline...and even Paul wouldn’t run up it.) Then we missed the water station...GRRRR....

I am SO proud of Betty for running more than 14 miles (I mapped it....I picked you up at the south entrance to San Elijo, which is past the 14 mile marker...I also mapped my detour to the bathroom...which I think made my run longer...Mapquest says 16.32 miles...which makes me feel better about my 3 hours & 20 minutes... which includes the potty stop!). Heck I’m proud of all of us...16 miles is a freekin’ long way to run.

I told Edith this last night...(I drunk-called Edith to thank her for a nice email she sent me about my wanna-be field hockey playing daughter...in which she told me that she and TALL TIM ran 10.5 miles yesterday morning as well and that it was really hard (the run...not Tim))...ANYWAY, I’ve come to the conclusion that running with the track club makes it a heck of a lot easier to run these long distances...which is mostly mental (OK...It was physical too. I was so exhausted coming into Solana Beach, up that last hill, that I really just wanted to sit down and cry...but then Paul came up and convinced me to run up the hill with him...so I did.) In any event, I know that Edith was a little sad because running 10 miles seemed so difficult...and I just wanted to assure her that running with lots of other people makes it so much easier (for me). I don’t know why that is, but it has certainly worked for me. I hope you get to join us this weekend.

So, I’m proud of us and all...but I still want to ponder how Elvis continues to creep into the karma of this journey for me...really...he does...First of all, as you know the RnR has some running Elvi competition that they do, so a few weeks ago, there was this guy who was doing the marathon in his Elvis running suit. Then I got lost in Coronado a few weeks ago...but got through it because I happened to have Mike’s iPod with me and got to listen to Mojo Nixon singing “Elvis is Everywhere” (among other songs)...which made me laugh. 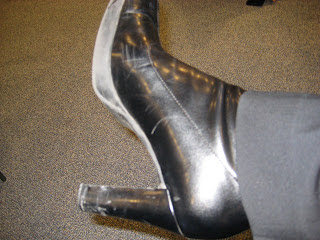 Then I ended up going to a fundraiser last night (yes...I went out last night...I’m a stud (see funny story about “stud” below...), but I was promised wine, so you know me, I went) ...Anyway, it was a really nice event and I wore HIGH HEELS!  (yes, after running 16 freekin’ miles, I somehow managed to get my feet into 4” heels...don’t ask how, but I suspect the promise of wine helped.

The event was a casino night for Kuyamaay Elementary School, (Don’t ask how I ended up there...I know, I know, I don’t even go to fundraisers for the school where I work, or where MY kids go to school... again, I remind you, the wine...) but my sister-in-law is really involved in the school and invited us to go...and we’re good inlaws, and were promised wine, so we went. 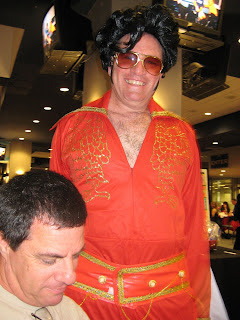 Anyway, as we walk in, the first thing I notice is this guy running around in an orange Elvis suit (wig and all), and my first thought is: “What a dork!” followed by “I wonder what bet he lost that caused that...”

Then, a few minutes later, Elvis walks up to me and say s something like “hey hotstuff” which makes me think,

Then I realize, it’s my brother-in-law, Richard...dressed up like Elvis...and selling raffle tickets (I so needed more wine).

OK...we’ve got 56 (or something like that...) Two months ago, I could barely run an hour...yesterday I ran for three. I figure I need to be able to run for about 5 to finish the marathon...Somehow it sounds doable now...I must be crazy.

Or seeing Elvis... Help me.

p.a.
You all rock! I'm so proud to have you all along and I can't believe I made it that far. I only ran about 12 of the miles but gotta run with Mik for a couple (always such a great friend) and then Bumper stopped by for a minute or two. Then Cindi ran with me for a few miles which really was great. I saw my cousin running towards me with T.I.T. (that's what I call TEam in Training - because none of them look like me). Then my aunt Wogged with me for a 1/2 mile.
I hate Leucadia and I think I'll be able to get stronger each week - especially if you keep me laughing. BBJ is so brave to hang out with us and he has become such a strong runner! He finished the 16 miles faster than the 1/2 marathon in August!

Alice
Oh...I forgot to add the story about "The Stud."

So...there's a silent auction at this fund raiser and at one of the tables is this basket that has home remodeling tools (or something like that) and its labeled "Studfinder" which I think is slightly funny...maybe a little more than slightly because of the wine, that and I'm at a school fund raiser...

Anyway, this random guy walks up next to me, looks at the basket and says something like "hey, I could use a stud finder."

I sort of do a double take...I mean, is he joking? laughing? talking to a friend? to me?

So I wait...then I can't stand it anymore...I mean it was A FREEKIN' GIFT! I sort of figure he wants me to make the joke. So I say, "you know, usually I hear women use that line." and I sort of laugh, cuz I thought at the very least I was being obviously clever.

He just stares at me. Not even a courtesy chuckle...

So I just apologize and giggle something like, "yeah, I know. That was inappropriate. I don't know you." And and he's just sort of glaring at me.

Went to find Mike to tell him my story...He laughed.

OK, Carlsbad is a long city, Leucadia needs to fix its streets, Encinitas went well along the beach except for the one hill by the ENCINITAS sign. What was that Taj Mahal looking place in Encinitas?

I just kept thinking after the 16 miles in Solana Beach, could I have done 10 more miles? Very inspired by Mrs. Harris, Jaime, P.A. for their efforts. Mik, too.

Alice
The Taj Majal place is the Self Realization Fellowship Temple. There's a kinda famous surf spot below it called Swami's.

The guy at Movin Shoes seemed to think they'd help with my blistering issue...so I'm going to give them a try with some of my shorter runs this week before the 2.5 hour run on Saturday.

Alberta
I felt pretty good until about mile 12 and then I felt like an 80 year old women who needed a knee replacement. I was very happy to have Alice to run with from mile 9 on, she kicked my butt. About mile 12 I almost fell on my face as the sidewalk jumped up and grapped me. Biggest mistake that I made was following Alice and Paul and his giggling girls down the hill to the bathroom. I wonder how much of a difference he is making in their life :) I was pissed they took me down a big hill for no reason I would much rather have pulled a Betty then stopped. I finally left them and made the mistake of following some lady with a visor up the hill who got me lost. I should have know not to follow her. Should I have asked her where her cocker spaniels were? Looking at this picture of us maybe I should have just asked here to borrow the visor!!!!!!!
Monday, April 7, 2008 - 10:11 AM

BBJ
Thanks for the ID tip on the blog.

BTW, if anyone wants some new bumpin'-bouncin' tunes to help with those tough miles, I put together a partial BBJ music list. Let me know if you are interested.
Monday, April 7, 2008 - 10:37 AM

Edith
Now imagine this conversation on Sat night...
A: "I'm wearing boots. Can you freakin believe I got my foot into a boot?"
E: "What?"
A: "But it works because they are stretchy leather. I think I am going to take a picture of my boot right now."