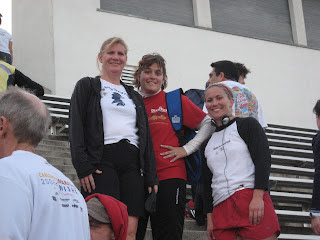 OK, OK...this started off as a Tuesday night post, but now it’s Wednesday night. I’ve missed American Idol (shhhhh don’t tell me who American voted off...I’ve got it on the DVR), ...but last night, after getting home last night and dealing with home/kid/hubby stuff, I didn’t have the heart (or a sense of humor) to write.

But it is mid-week, and we have so many things to ponder and discuss that I couldn’t resist. That, and as I’ve told several of you, I’m trying to figure out a way that I can quit my day-job and become a full-time blogger, so I might try posting a couple times a week for awhile...that will probably also mean that I end up posting about other random things in addition to the Marathon stuff. 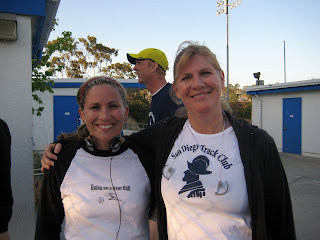 Fortunately, this post IS (mostly) about the marathon stuff. First of all...HOORAY! There were five (count ‘em FIVE) of us at track practice last night. I was so happy I coulda just died (well, the workout last night did nearly kill us, but that’s another story...)...even better than that when I got home, we had this from Edith

After a bunch of soul searching tonight, I've decided I'm going to suck it up and try to get the miles in, even if that means getting up at 5:30 to get a run in before little league games, and stick with this whole marathon thing. Cindi is working too damn hard for any of us who are not injured to bail on her! (meaning me). And my cute Dominican friend with the bad teeth, but fun attitude, told me tonight after practice, it doesn't matter if you wind up walking most of it...you are there and you can complete it...who cares how fast? 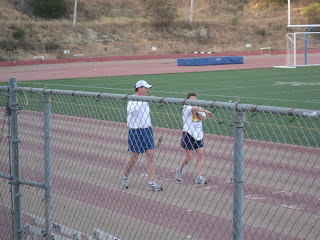 Guilt much? My mother would be simultaneously proud and absolutely astonished that I was making somebody else feel guilty for not running in a marathon...I love it. Catholic - Jewish - Running Guilt all at once...who knew?  

Also, who is your Dominican friend? How many dudes do you have going right now Edith? Does tall “Tim” who wants to run w/you on weekends know? What will he say about everyone else who will line up to see you in a speedo and body paint, raising money for the Leukemia Society (you give and you give, don’t you).... But don’t worry, we won’t talk any further about the whole Nike Women’s 1/2 Marathon debacle... I think we covered that thoroughly yesterday afternoon via email.

Only, have you noticed that that this post is all in purple...in honor of Edith

And even though she’s gotten enough face-time in this post, here’s a photo of Edith (with a fence in front of her face...nice) and Tall Tim. I’m pretty sure if I’d taken a second photo, it would include Edith giving me the finger...which would surprise not a single one of us.   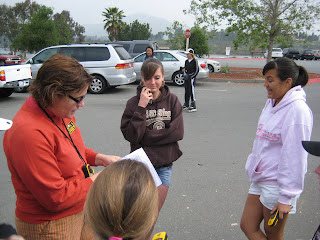 Finally, (and this is the part that has really NOTHING to do with running, but) I though you should all know that Betty and I took our kids and a few of their friends GIS/GPS (whatever) last Sunday. Basically they used her GIS/GPS (whatever) devices to treasure hunt (or cache-hunt) at Lake Murray. Who knew??? Apparently, hidden all over the freekin’ world are little tupperwear boxes filled with useless crap...and you can go on the Internet and get the coordinates for where they are hidden. Then, you can use a GPS/GIS (whatever) device to find the cache (box).   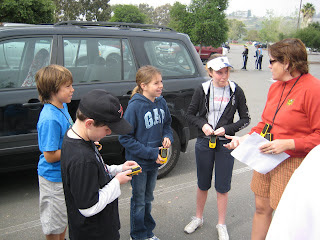 It was a great morning...kids running all over the place. Betty and I walking Lake Murray...then my son (who Betty named Turbo) and his friend decide that the best route to the next treasure requires them to hop a fence, onto the golf course...which they can’t get out of unless they hop another fence (or climb a wall...I don’t think I ever got the full story)...but which they can’t get out that way either without Turbo scratching up his leg pretty bad...for which he has to have a total melt-down.  

Betty bravely tried to lift my 80+ lb son over another fence...but for some reason, he didn’t have much confidence in this...which led to another melt down...and me (the nurturing mother) just telling him to (basically) suck it up and walk back to wherever he first got on the golf course to begin with...yeah, I get mother-of-the-year award...   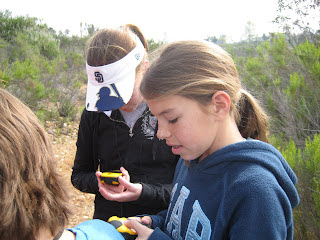 Anyway...it all worked out...but I LOVE Betty and her motivational ways with kids...a true genius. At one point, Turbo was walking at a ssssnnnnnaaaaaaiiiiiilllllllsssssss pace and we’re still about a mile and a half from the car. I’m getting frustrated because he’s walking so ssssllllllllooooowwwww and quite frankly, I’m tired of the whining (it’s a scratch on your leg for god’s sake...there’s a little blood, but I don’t see any bone protruding (shut up if you make a joke here because I used the word bone...shame on you....he’s a little boy)...anyway, Betty looks at him and says:   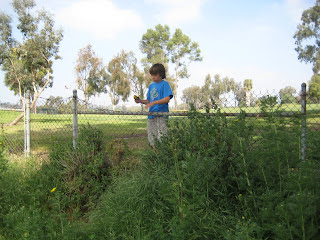 “Hey look, I’m hungry. I’m going to walk back at a normal pace...go get lunch...feed the girls and I’ll bring you something back. OK? Whatdaya want? A hot dog?”

Turbo just looks at her like WTF, then starts walking normally.

Genius....I LOVE you Betty...you make this journey all worth it (or something like that). By the way...this is a picture of Turbo on the golf course which I took before I realized he was crying (and bleeding)...and the fence that Betty tried to lift him over... 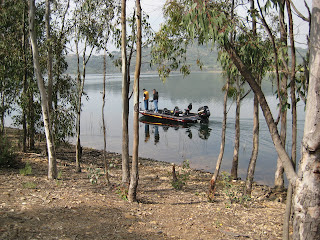 Yes, mother of the year award for me.  

Betty
Yes - for starters Alice, some of us were Wogging at a slower than normal pace. I think for the marathon you guys can finsh and go to lunch and then come and get me - I'll be going at the Turbo pace!

I love you for putting GIS into the Blog - actually - you've been doing it all along while mapping your routes. Additionally, I'm having a great time geo-caching. Debi and I are setting up a few courses here at Helix and I'll be hiding my tupperware containers all over. In fact in the future, I think I'll leave these at your house so that random geeks can come over and search your property!

Edith
The purple is making me laugh...why am I so bitter about TNT? But MY big question of the day...WHERE DID ELSIE GET THE SDTC SHIRT?! Is she secretly part of Rage Against the Machine and is just not telling us? And where was I during all these photo ops? I swear I was there! My (still) aching legs can attest to that!

Edith
So this I need to share....because I just can't let things go...I contacted Nike to find out exactly why they rejected me. Come to find out, it WASN'T a screw up with which Wells Fargo card I used, I actually typed Alice's email address wrong. Knowing that this had nothing to do with my bank and everything to do with sheer stupidity, actually made me quite happy. I'm just dumb. Such a relief! (Do you think Wells Fargo will sponsor me?)
Thursday, April 3, 2008 - 04:41 PM

Elsie
Alice - I do think you've got the knack of taking really rather dull stuff and making it look good. Did you photoshop those pictures? We look relatively good, (see how Betty's has her sexy pose going on- she looks 18, I'm not fond of my double chins though) considering it's after the run, and we're barely able to walk up those stairs. Edith, I'll contribute to your paypal account - and I think looking for corporate sponsors is a great idea - you might start with the Alex Smith Foundation, who I think is looking for a good cause. I'm also protesting that the pictures I send you haven't made it on the Blog. Glad Edith is feeling guilty (although tall Tim and the Dominican may help her get over it) cuz I'm not. See ya'll at the track!
Thursday, April 3, 2008 - 09:08 PM

Alice
Chin up and out...that's the "no double chin" move...works for me. You're right...Betty does have the model pose going on. She's HOT, that's for sure.

As for the harassment about your remodel photos. Here's one.

Finally...as I was Betty's Bitch today (you and Alberta know what I mean), here's your reminder that I'm picking you up in the morning. We'll be at the train station by 7am...

Alice
And then there's this...Betty's way of making sure that a student drew a thermometer that wasn't inappropriate
Friday, April 4, 2008 - 06:01 PM

Seriously Submitted by Aka Alice at 4:47 PM