The End of Summer Fire Run used to be known as Moondoggies to Moondoggies. It was named after two beach-type restaurants, one in La Jolla, the other in PB. I think the PB Moondoggies is still at the end of the pier. I suspect the owners were no longer interested in paying Prospect Avenue - La Jolla rents, and thus moved or closed or decided that one restaurant was enough...

In any event, this is the second year we've run this point-to-point 4 mile run which occurs the week after the AFC. It's a nice fun, flat, little race that ends on a slight downhill slope. I LOOOOVE that you can see the finish line for the last 1/2 mile or so. 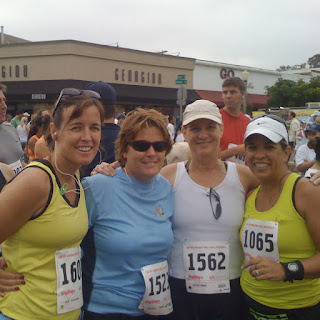 Mik, Betty, Elsie and yours truly, before the run
Betty, Elise, Edith, Mik and I ran this year. I discovered later that Clarence, and Madge also walked the course... a full heffer field! Afterward, we went over to Mona's for an awesome breakfast feast! (Mona wouldn't run with us...but agreed to feed us afterward...no complaints here!). Yes, Edith is not in the before race photo (as usual). It's an ongoing game we play...Where's Edith (sorta like Where's Waldo, but without the red and white striped shirt)

Some race notes and observations 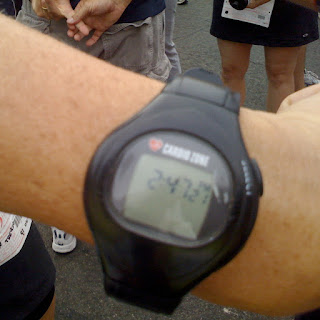 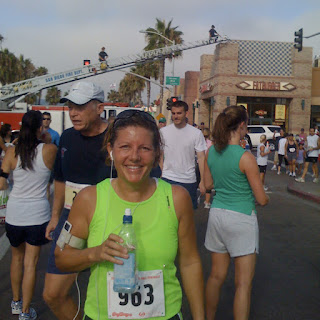 Edith with the firefighters...they are behind her on the fire-truck...really, they are! 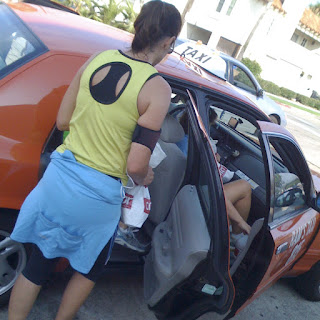 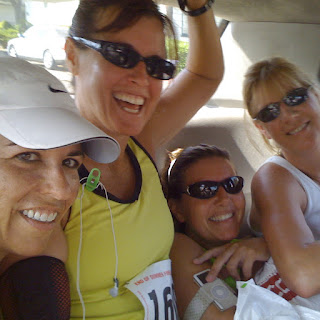 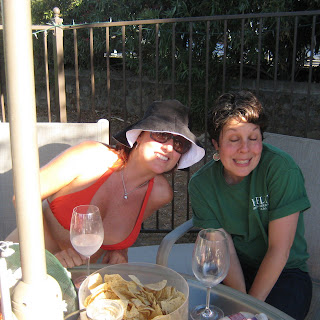 Mona and Theresa...with empty Lemon Drop glasses...hmmmmm.
Fine morning, fine running...which begs the question...why do we run 13 miles when 4 is so much easier (answer, 4 is easy because we run 13...duhhhhh).

No local races until October-ish, but Betty is all enthusiastic about doing the Urban Dare next month. Anyone ever done this? It's supposed to be like a one-day Amazing Race event.

Also, also...Thanks so much for all your positive comments and encouragement about my new job and for setting me straight about my little rant about my life changing and related concerns. I know I'll find things to write about and the running thing will work out because it's a part of who I am now. Please know that all your positivity is really, really, really appreciated (you like me, you really like me...OK...that WAS lame...)
Seriously Submitted by Aka Alice at 12:42 PM