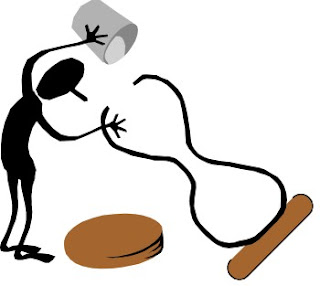 So, I'm four days into my new teaching position (hee, hee, hee, she said "position.") at the community college. It's going to be QUITE different, in many ways, from teaching high school (other than not seeing the heffers every day), but different in other ways as well.

The biggest different will be my work day. On Mondays and Wednesdays, I'll be teaching three classes. My first class starts at noon and my last class ends at about 9pm, and I'll have a rather large block of time between the end of the noon class (1:45) and the beginning of the first evening class (5:00). That time is filled with things like office hours and having to move my car from a satellite-lot off campus (because faculty can't park on campus during the day...it's a long story involving the building of a new parking structure), to a lot on-campus where I can park in the evenings. Then I'm back on campus the next morning at 8am for my only Tuesday/Thursday class. Including office hours those days, I'll be done teaching/working at noon on Tuesday and 9:30 am on Thursday. I don't have any classes on Fridays.

Yep, you got it right, I'll be done teaching/working at 9:30 on Thursday morning (my high school teacher/administrator friends are NOT weeping for me right now...not even my friend who works at the county office of ed.)

When I taught high school, I was on campus daily from 8am until at least 4pm and often later, with barely time during the day to pee, let alone run...unless I was running to the restroom, but that's another story. Now, I'm hoping I'll have time for the rest of my life, including running, my family, writing (not only this blog, but other education-related stuff like articles and maybe a book, as well)...which is a huge reason why I took the teaching position (hee, hee, hee) at the CC. I loved teaching high school dearly; I just didn't like the lifestyle.

It would seem that this new windfall of time would mean that I'd have time to run on Monday and Wednesday mornings before I teach, but I know me...I won't. I'll wake up, deal with the kids, get them off to school, and then I'll need to get ready for my noon class. I wish I was organized enough to have already planned and prepped for classes well in advance, but I've never been like that (and I've been at it for 17 years). The reality is, especially since this is the first time I'll be teaching these classes, I'll be planning and prepping until class starts. So, while in my perfect world, I'd get a run in on one of the mornings, I wouldn't bet the house on it.

I'd like to continuing working out with the track club on Tuesday nights, but since I'll be away from home on Monday and Wednesday evenings, I'm kinda feeling guilty about being away on Tuesdays too. I could always run earlier in the day on Tuesdays, but then I'd miss running with the track club and with (most importantly) Betty, Edith, Alberta, and occasionally Elsie who show up on Tuesday nights (and wouldn't it be a hoot if BBJ showed up once in a while this fall) ...plus Tuesday Track Nights have also given me much blog-fodder. I'm torn.

The good news is that I'll have plenty of time to run on Thursday, Friday, Saturday and Sunday...but here's the bad part; most of those times, I'll be running alone...which I really don't enjoy...and also, and here's the other tragedy...Again, I end up with not much to blog about. I'm just not that interesting on my own. (Hence, today's post...)

For example...I haven't run since Sunday's 1/2 marathon. Partially, I needed a rest day (or two) but mostly because as this has been the first week at the new job, and students don't start until next, I have been consumed by meetings, or trying to get stuff ready for class on Monday. I haven't been getting home until 7:oo or so...then there's dinner, homework, showers, bed for DramaGirl and Turbo, then me collapsing, exhausted.

I finally got on the dreadmill today for 30 minutes. I managed to calibrate my Nike+ sensor so that it doesn't think I'm running a 8 minute mile. Then I went to the dentist.

So, I'll try to keep it lively and find other random things to rant, I mean write, about in this new life I'm starting (redundant...would one really start an old life...see, the English instructor in me is already ready and poised with her red pen). Life is so full of randomness, that I'm sure I'll find something.
Seriously Submitted by Aka Alice at 8:23 PM