Or...Three Reasons Why I Love Running With Betty
Betty and I once again woke up REALLY EARLY to get our Virtual 8-Mile Olympic Race in before the heat, humidity, and other professional obligations (I was on an agenda to give a presentation at a teacher workshop at 10:00) overtook us. We didn't wear any Olympic regalia, but we did talk about the opening ceremonies for a few minutes as we ran...does that count? The drummers at the beginning were completely amazing!

I am completely lucky that I have a running partner. Betty is the one who talked me into running my first 1/2 marathon, my first marathon... We're both pretty competitive, but the way it manifests itself, since neither of us runs very fast, is that we keep each other running. Inevitably, there will be days (weeks) when one of us doesn't feel like running so much, but then the other one will call, and we'd both rather die of shame than think that one of us is running and the other is not. Really, it's an ego thing...but in a good way.

So as Betty and I head toward the one year anniversary of our first 1/2 marathon (next weekend's America's Finest City 1/2), I thought I'd share in this race report as three of my reasons why I love running with her.

Reason No 1.
Betty doesn't care too much when I'm late to pick her up...in most cases it works to her advantage.

To begin with, I overslept. Woke up at 5:45 and was supposed to be at Betty's house by 6:00...well, THAT wasn't going to happen. So, I sent her a text that I'd be there by 6:10. Luckily, I'd laid out most of my running gear the night before (how my watch ended up next to my flip-flops underneath the dining room table, I'll never know). I slammed down a 1/2 cup of coffee (just to stave off the I'm-addicted-to-caffeine headache and I just LOVE Walter, who got up to make me a pot of coffee, as I stumbled and ran around trying to get ready quickly) and hoped that the pizza I ate the night before would give me enough of a carbo-load to make my tummy feel not-so-empty (my pre-race nutrition leaves much to be desired doesn't it). I'd use a Gu before I started running and one time during for some calories to burn...and I was OUT THE DOOR!

Reason No. 2
She is really flexible about where we run and pretends to let me decide.

I think I've mentioned before that I'm a control freak. That's why I drive. The night before the Virtual Race, I mapped out several routes we could take from Harbor Island. I wanted to make sure we ran 8 miles after all. All of the routes I mapped out had us going west. The advantage of all of those loops is that they would have taken us by the water station set up by the Track Club. 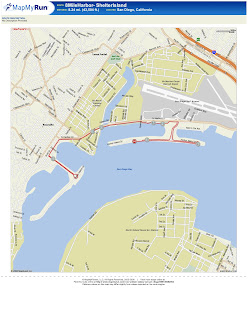 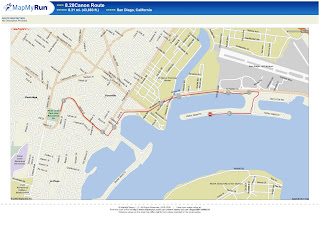 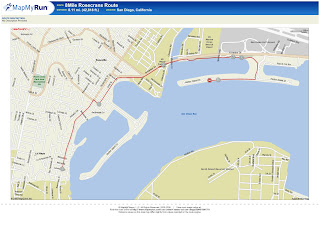 But, when Betty and I got to Harbor Island, we took one look at the sun starting to shine on Point Loma (for those unfamiliar with San Diego, Point Loma is to the south-west-ish of where we were. All my pre-mapped routes would have taken us toward Point Loma), so we decided immediately to head east, toward Seaport Village and downtown San Diego, where it was still overcast and foggy. By then it was getting close to 6:30am and we were both already sweating due to the 78% relative humidity... a little moist, dontcha think?

Anyway, here is the route we ended up taking (click on the "Markers" button to see the miles. It'll help with the rest of the race report, which I swear I'm getting to):

Reason No 3
Betty makes me laugh
I wish I could remember all of the random things that Betty and I talked and joked about during our race. I know that when I'm running, I think "I gotta remember this" for the blog, but most of the time, I forget. Here's my best recollection, although I emailed Betty this morning to remind me of the rest: 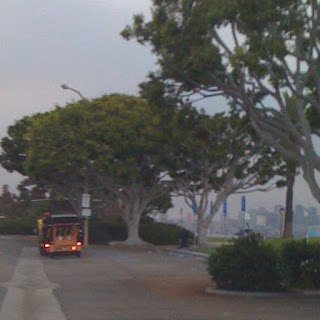 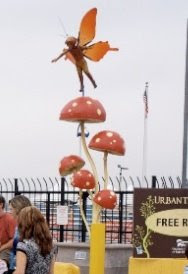 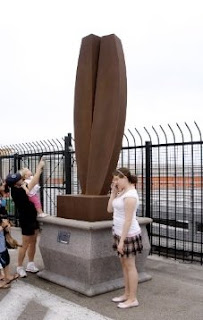 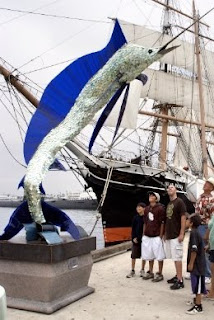 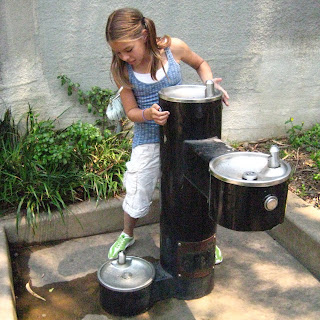 Thanks to Non-Runner Nancy for putting the Virtual 8-Mile race out there. This is the first time I've done a virtual race and I'm looking forward to reading everyone's race reports (I've already read a few from those of you who were able to run your race on 8/8/08. I had to wait until 8/9 to do ours).

Seriously Submitted by Aka Alice at 11:13 PM