For the first, oh I don't know, 40 years of my life or so, I ran chronically late to EVERYTHING (yes, I know that some of you are young, and I just used the word "chronic" which has a totally different meaning than my intended meaning of "constant," and if you're old, like me, and you don't hang around teenagers, like I do, you totally don't know why the young people are laughing right now, to which I say, find a teenager and ask them what "chronic" is; they'll tell you...but then they'll laugh at you because it's probably not even a hip and current word for MAR-I-JU-ANA anymore...) YES, BUT I DIGRESS!!!

Anyway, this morning I was late picking up Betty, which almost NEVER happens any more, especially where running is concerned, but this was one of those morning where I woke up late, and then wandered aimlessly around the house for 30 minutes, and not really accomplishing anything...really, truly, just spinning my wheels.

Despite my house-wandering, I still forgot my water AND I forgot my flip-flops (for after running) AND I forgot the receiver part of my Nike+. This occurred even though I spent several minutes making sure the sensor was attached to my shoe. However, without the receiver, as far as I can tell, the Nike+ sensor is useless shoe-attachment...GAH!

The worst thing, is that by the time I picked up Betty and got to Balboa Park, it was close to 9:00, so even though there was some morning haze still hanging on, it was getting a little warm AND it was really humid (72º, 80% humidity).

An aside about the weather...I know I write about the weather A LOT, which in San Diego is really rather silly. We have no "weather" to speak of here. About 90% of the time, the weather here is almost perfect. Sometimes it gets a little hot, cool, humid, whatever, and San Diegans get all hysterical about the less-than-perfect weather. You should see people here absolutely FREAK if it rains for more than 20 minutes. It's the lead news story on the local news if it rains for 5 minutes even! Local San Diegan's certainly don't know how to drive in the rain (hint: SLOW THE "F" DOWN PEOPLE!) It's crazy. I grew up in Reno, NV...and there we had SOME weather, meaning that in the winter it would snow and it would get pretty cold (like sub 10º cold...) and EVEN STILL I know that was not extreme weather. But I've lived here in San Diego for more than 20 years now, and so I consider myself something close to, but not quite, a local (I do drive more slowly than the average San Diegan when it rains). Still, like a local, I do complain about the weather whenever it is less-than-perfect...for this I apologize, especially to all of you who live and deal with actual, real, weather... I know that there may be some of you in the gulf-coast area who are about to deal with some really serious weather due to Gustav...I hope that you all are safe and sound and taking care of yourselves. Feel free to throw things at your computer screen as I finish up my rant about the relative humidity Betty and I endured this morning.

So, we get to Balboa Park, agree that it's too late to run 8 to 10 miles due to the expected heat and relative humidity and agree to run for about 45 minutes. Here's the route we took.

I have no idea how that happened. All I know is that I felt pretty strong the whole way. The thing about this route is that parts of it are included in several local runs that go through Balboa Park. The AFC 5K, which I ran a few years ago, is one. The Komen Race for the Cure 5K, which I've run a couple of times, is another. The end of the second mile as you turn that last curve onto 8th street, is a gradual incline. I used to think of it as a big hill and I remember the first Komen Race, when I just walked almost all of it.

I was thinking today as I ran, about how it wasn't such a big hill...not a big deal at all. Nice...

The other thing that occupied my thoughts as I ran today, was my new arm-band for my iPod Nano that I was wearing. Most of the time, I slip my nano into a pocket and I string the headphones up my shirt and through the neck because I just HAAAAAATE the feeling of the earbud cord whipping against the back of my arm or neck. I always end up thinking some nasty bug has landed on me and I no-doubt look like a total spaz, slapping at some invisible gnat, when it was, in fact, the cord. I have some serious issues with this.

So, I've been stringing the cord up my shirt and out the neck-hole. The cord does get sorta-sweaty, but it stays put and it doesn't bug me (hahahaha..bug me...get it?)

But here's the problem. I go through earphones like toilet paper. About every other month or so, I've been having to replace my headphones because one of them goes out and I can hear through only one side (which isn't such a big deal since most of the time I use only one side, so that I can hear if an oncoming car is about to squish me), or the cord begins to fray, and I can see the wires underneath, or they get damaged in some other way, and I started to wonder if this was happening as a result of the cord rubbing between my sweaty back and sweaty shirt. hmmmmmm.

So, I decided to try to look hip and cool while I'm running, which is no mean feat by the way, and I purchased an arm-band carrier for my Nano and thought that I'd let the cords be FREEEEEE. It looks like this: 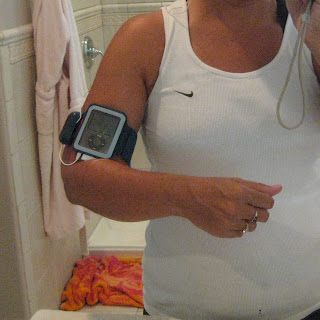 The horror of my upper arm ...and yes, that is a beach towel on the floor behind me. We use a beach towel as a floor-mat because the shower door leaks water onto the floor so badly. You don't want to know what other horrors I cropped out of this photo...
So, I ran with the cords aflutter this morning, and they didn't bother me too much, so maybe I can look all cool and hip running with my tunes, and also save some money on earbud replacements.

In any event, here are my questions for you all.
I'd be so grateful for your feedback on the great music-listening device dilemma that I'm having.

Again, if you're in the gulf-coast area. Take care of yourself...that is, of course, the most important thing!
Seriously Submitted by Aka Alice at 12:36 PM