It was a pretty low-key birthday this year. Walter and I went out to a new wine-bar in town. He and the kids gave me some fabu gifts including two beautiful necklaces and Dance, Dance, Revolution for the Wii, which I stink at, but which also may count as cross training, so I'll keep on dancin'. It's been a pretty low key birthday for this girl who used to celebrate not only birthday WEEK, but birthday MONTH. But we have lots of other family, and work-related things going on in our over-booked, way-too-busy, lives right now to do anything more. And I'm OK with that. Perhaps I'm growing up...

But today, I'm thinking about being 46...geez...I know it's not REALLY old...I mean look at Dara Torres. She's a rock and such an inspiration. And in fact, when I tell people my age (or they guess), most say they'd guess me to be about a decade younger. I don't THINK they're just trying to be nice.

I DO think they're misled due to my relative immaturity...and my hairdresser who does just a kick-ass job on my roots...and heredity of course.

Examples of my immaturity?
Seriously...I'm going to faculty meetings all next week. I can hardly wait.

On the other hand, there is some evidence of me getting old and cranky and having less and less patience with things that don't go my way.

An example of my crankiness?

Every single time, I've fallen in love with a running shoe, they get discontinued and I have to go on a search for a new shoe to fit my fat foot (hey, two pregnancies in which I gave birth to 10 pound babies...and then this running thing has taken its toll on my feet...I didn't always wear a D- width). I mean just look at this thing. 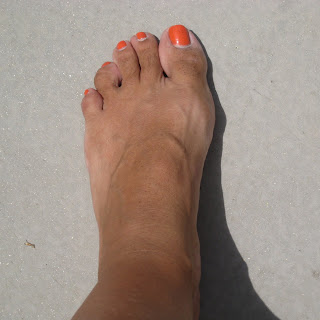 You try to find a shoe wide enough to accommodate THAT! I've tried several. Some of my favorites have been

Asics Gel Kayanos were my first running shoe. It was like running in butter, and was great until I started running longer distances...but since I over-pronate all over the place, I needed a shoe with more stability. Plus it's been DISCONTINUED so I went to...

Saucony Hurricane 9 - LOVED this shoe. Stability, but cushion-y...almost a perfect shoe for me. Then about a two months before the Rock and Roll Marathon, I wanted to get another pair...DISCONTINUED AGAIN...I try the newer version, the Saucony Hurricane 10. It doesn't have quite the same wide-toe box as it's predecessor, even in the D width. I almost break my foot running in them...which led me to...

New Balance 1223 - The widest shoe there is (for women, unless I go into a men's shoe...but then there'll be other issues). It's not quite as cushy as the Saucony, but it has an enormously wide toe box... This pair has probably close to 500 miles on them (including all the long training runs before the marathon). And I can tell that they're not giving me the support they once did. (I've had some tenderness in my Achilles for the last month, which I suspect is a result of this). So last month, I go to purchase a new pair as I'm training for the AFC 1/2 marathon and again THEY'RE DISCONTINUED and worse, the new version WON'T BE AVAILABLE UNTIL SEPTEMBER and even worse, because I wear a size 9-D, my local running shoe SUPERSTORE is SOLD OUT (and won't re-order)...ARRRGGGHHHHHH! 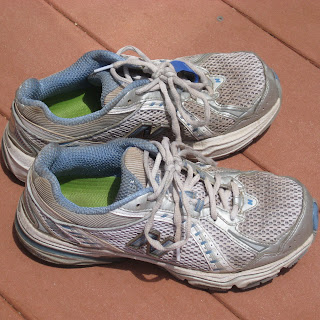 So, I'm stuck. Do I continue to train and even run Sunday's AFC 1/2 marathon in these old things? Do I search for a new shoe? Do I do an Internet search to look for these online and have them shipped to me, paying a fortune in shipping and handling? GAH!

Luckily, there's a smaller, family owned shoe store that was willing to call the New Balance rep and special order a pair for me. (HOORAY...Note to self: Shoulda been going there all along instead of the running-superstore!) Today they arrived... 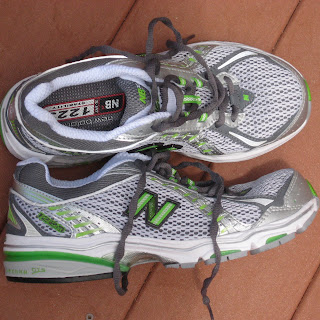 So, I'm out with the old New Balance (at least for now) and in with the new pair...at least for the next few months until the NEW VERSION, THE 1224'S come out. Hopefully they won't be that different and will still accommodate my fat foot.

Old and new...some old things have gotta go, that's for sure. Some, you keep around cuz they keep on getting better with age.

Here's to hoping that I fit into the latter...
Seriously Submitted by Aka Alice at 12:28 PM