The Dangers of Self-Massage

I had other ideas for the title of this post, such as:
Quite by accident, I ended up at the Physical Therapist's office today. (Only partially an accident...his office called...I picked up the phone...they said they could fit me in at 12:30 today, so I said, "OK.")

In fact, after I posted this morning's beautiful photo of my hip-bruise, I figured out how I managed to hurt myself. As I was looking at it's purple-ness this morning, I realized that the bruise was in the EXACT SAME SPOT as where I was massaging my hip with "The Stick"...you know...this thing...

I had been using it repeatedly, and apparently quite vigorously, throughout Friday and Saturday, in an attempt to massage my sore hip into some kind of submissive shape for the 1/2 marathon.

Apparently, massaging quite vigorously can lead to this: 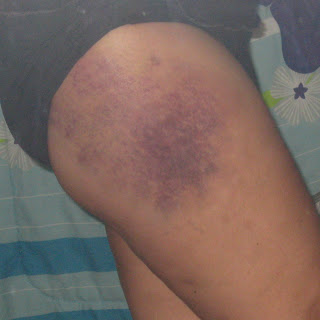 So... I sat down with the PT. He took a good long time talking to me about my running habits, how much I ran, my stretching routine, my shoes, when I started to have pain, etc, etc. And according to him...turns out that I made three pretty critical errors which led to my hip-trauma.
Then, I showed him my hip. (I hadn't fessed up to it yet)

He laughed when he saw it and made everyone come see my third critical error.
Actually, he did a really nice job of explaining how I'd probably had some small strain in my hip muscles, which may have even happened before I switched shoes, but was aggravated by the shoe switch, by the extra mileage I ran in the new shoes, then which was aggravated even more by my overuse of the stick, and then I further abused my muscle by running 13 miles on it.

He did say that only women can withstand that much pain. A man would have folded. We both joked about how the toughest women are in their 40's and who have given birth. I don't know if I agree with him or not, but I'll take it as a compliment.

His "therapy" prescribed for fixing my sore hip is as follows (Hey, I paid cash for this as my insurance didn't cover it, so I figure I own it now). 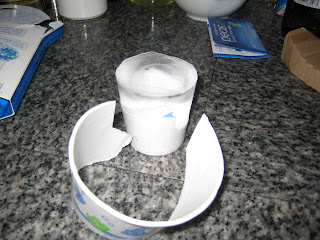 Here is one of my ice-massagers. Edith recommended the same thing to me for my shin splints last January when I was training for the marathon.
Next week I can start walking/running for really short amounts of time (like a 10 minute walk, 10 minute run, 10 minute walk, preceded and followed by the three above steps)...and I can add 2 or 3 minutes of walking and running a day until I'm up to an hour...then I can back off on the walking part until I'm up to full speed. Should take about a month (woo hoo...just in time for the Carlsbad 5000 and well before La Jolla!).

So...I've purchased a lot of paper cups, filled them with water, and have them stored in both the freezer in the garage and the kitchen freezer. I've promised not to beat myself with a stick again. and 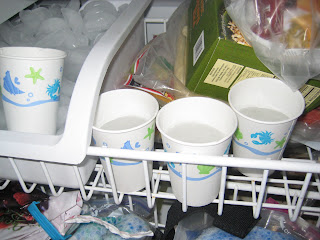 So...let this be a lesson to all you tough women (and men) out there...don't beat yourself with the stick, self-massage is certainly acceptable, and use ice.