The cost of living and housing is pretty rediculous, but it doesn't suck. And yesterday, I decided it was worth every penny.

It's been a busy/crazy week. I'm trying to get five different syllabi ready for all my classes. My mother has some health issues, so I'm going to go to Vegas next week to see her and doctors. A deficit of time and (mostly) money are causing me to NOT go to the annual heffer-Tahoe event this weekend (yes, the herd will be in Truckee, CA...if you're in the neighborhood, the Tour d' Truckee will probably take place on Sunday night...buy the girls a bev, wontcha?).

Also, there's this...on Tuesday night I went to the SDTC track workout. We did strides and calistentics. I had my iPod in my back pocket and I must have scrunched it somehow when I was doing situps, because this happened. 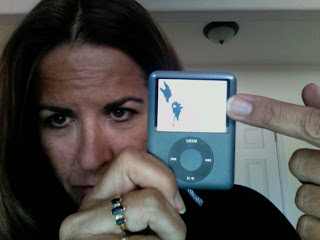 How sad is that? The screen is white with just a couple of black spots...GAH! Remember that time and money issue I was speaking of...I've got neither one to deal with this...
THEN, perhaps because I'm just a tad stressed about all these things (and a few more), I consumed about 40,000 calories in comfort food, snacks, and other crap on Wednesday...

So, yesterday morning I decided to NEEDED to go for a run. Lisa wrote on her blog about some running therapy at Lake BP, so started by heading off to there. As I was driving, I though to myself..."Self, it would only take me about 7 minutes longer to get to the bay, let's go run there instead!"

When I got to the bay, I thought "Self, let's just go run on the boardwalk."

So I did...and I won't lie. It was BEE-U-TI-FUL. Go, ahead and throw things at the computer cuz you're sick of me waxing on about the loveliness that is this January in San Diego... I can take it. YOu should all move here...really...I did...

And of course, I'm posting a few photos (because it's Photo Friday!). I don't know that the iPhone camera does them justice... 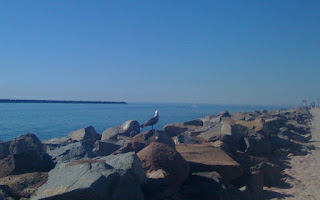 Another seagull...this one is not giving me the stink-eye... 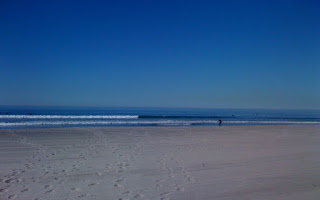 The beauty of January...South Mission Beach sans thousands of people
Actually, there were a fair number of people on the Boardwalk for a Wednesday morning--mostly seniors, mothers with strollers, what appeared to be college students, and probably college professors, none of whom have started classes yet. The run absolutely made me feel much better and less stressed, even though I did a Penny, and started running north (sun to back) and finished running south (sun in face).

This morning I ran at Lake BP. Not much to report, other than the run was much more difficult and I walked some (why is that?). I did figure out how to use the lap button on my Garmin so that I could mark my mile splits. (duh! push the little button that says "lap"). Is there a way to get it to mark laps automatically, like every mile? I'm sure one of you Garmin experts knows how to do this.

It doesn't add up to 47 minutes because it also includes the last .1 mile that I walked.

So...it doesn't suck to live here...which makes me feel better about the other stresses in my life. I'll be running with the SDTC in the morning. The schedule calls for an 1:15 minute run. I probably should have rested today, but the therapy was necessary.
Seriously Submitted by Aka Alice at 11:59 AM