I was going to officially declare that the holiday season is over...but DAMN those San Diego Chargers for winning. Winning Chargers means MORE get-togethers with MORE food and MORE bevvies...and well, you get the picture...

Truth be told, I'm not much of a football fanatic, in fact, I generally could care less about most professional sports. This is a minor point of contention between Walter and me by the way. He claims that I misled him into thinking that I was a sports fan when we were dating, but then showed my real "I-don't-really-care-about-professional-sports" colors once we were married. To which I say:

I am, however, a BIG FAN of football parties. So, since the Chargers are on an improbable and unanticipated late-season winning streak, we hosted a playoff party last night. Highlights of the party included another unanticipated and unlikely Charger WIN (which means more football parties NEXT WEEKEND...YAY) and Walter's announcement that this is his new favorite beer. He made me promise that I'd make no comments about it on my blog... 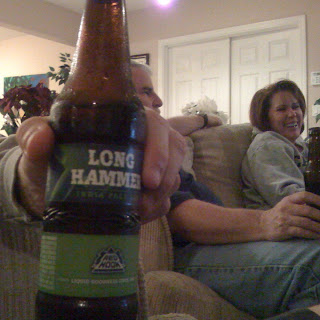 I have ABSOLUTELY no comments about the name of this beer, but it's called "Long Hammer" people...seriously... So, now I'll leave all the commenting to you.

Before the gala event, I did get a nice run in. I woke up early to get to the first meeting of the San Diego Track Club's Rocking and Running Meeting. Betty and Elsie joined me there.

The weather report for yesterday morning...raining and cool. As it was the first meeting, our coach, Paul, rallies the runners, introduces everyone, and generally starts his 22 week-long cheerleading routine, in which he gets everyone to believe that they can run a marathon. 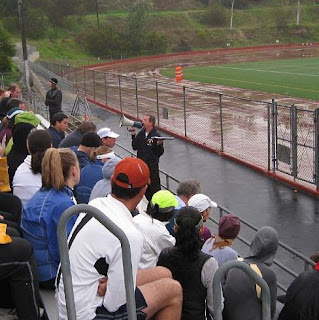 Here's fearless-leader Paul with the megaphone giving his pep-talk. Please note the puddles on the track and the "I'm freezing my ass off here" sitting stance of the guy in the red hat.
(Photo courtesy of the SDTC website...from where I will pilfer regularly for the next few months) 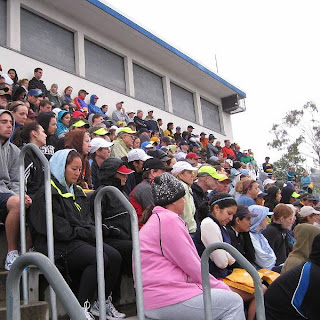 Another picture of freezing cold runners.

Irene and her husband Michael are probably in this photo somewhere. I, on the other hand, am NOT in the photo, so don't look for me. I arrived about 30 minutes late, picked up my race packet, t-shirt (a really nice technical t-shirt this year), my shoe tag, listened to Paul for about 30 seconds, and left.

This may sound lousy, but here's my rationale. I'm running the Carlsbad 1/2 in three weeks, and I really wanted needed o get in a good run, and I am in the slowest running group for the track club--the C Group. The C group was scheduled to run only 30 minutes yesterday morning (Hell, I barely cover three miles in 30 minutes and I needed to run more than that).

Also, it was raining, which was in some ways pretty funny because our first run with the track club last year was in the POURING RAIN...so at least it wasn't POURING RAIN, only misting rain, but it was also cold, and as much as I love Paul, I just didn't have it in me to sit in the rain to listen to the welcoming remarks.

Finally, I'll happily throw Betty and Elsie under the bus. They were not willing to listen to him either, although I will also say, they were willing to forgo the run as well and head straight to breakfast, but I knew I would want a mimosa, and 7:30 am seemed a tad early for mimosas...even for me.

So we ran about 4 miles through Balboa Park. Then felt justified in breakfast and mimosas at Casa Elsie. We had to go to the store to buy juice however because Elsie said that all she had was some green (healthy) juice. Betty and I thought that green mimosas might now be such a good idea. 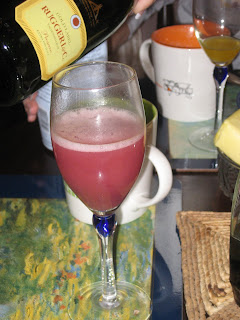 We did purchase something called Blue Juice, but it turned out to be more purplish, and made a lovely pink-ish mimosa 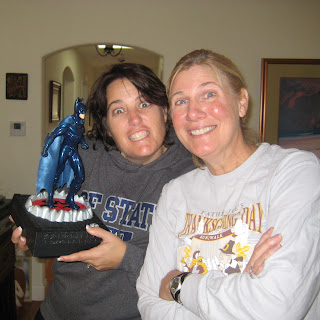 Also, Elsie is a grandma, so she has started to accrue toys for her grandson to play with when he visits...really the toys are for him, not us!

One would think that would be enough for one weekend, but NOOOOO...four miles does not make a long run, so we made plans for a long run this morning, which I almost slept through, but I cleverly put my phone on my nightstand, so when it rang at 9am (I kid you not), it woke me up. The conversation went something like this:

Betty: Are we running today?
Me: huh? yeah?
Betty: Are you asleep.
Me: huh? yeah.
Betty: Well, I'm going to meet Elsie, she just called me. She's waiting for us. So I'm just going to head down there.
Me: (starting to wake up) Come get me then.
Betty: Really?

I was ready in less than 10 (OK maybe 15) minutes...half asleep and drinking coffee in Betty's car as we rode down to the bay.

Again, what a difference a day makes. No rain. No mist. A few clouds...beautiful. I could have worn shorts (if I wore shorts when running). Ah...San Diego winter weather...don't like it? Stick around, it's likely to change tomorrow...

So we ran about 9 (excruciatingly painful) miles. Garmin says 8.91 miles/1:41:06. I'm thinking I need to give up the glass (or two or three) of wine I've been drinking for every night the last two weeks. 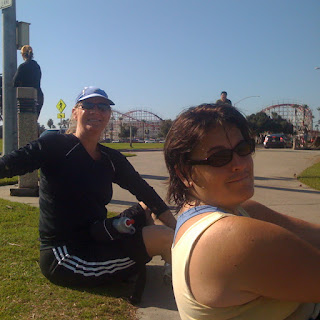 Elsie and Betty after their speed work. 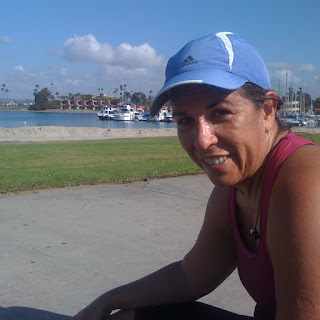 Yes...me dripping sweat after the almost 9 mile effort... I'm thinkin a detox diet is in order...
All I know is when I got home, I needed some serious ice on the glutes and hammies. It took me awhile to figure out how to ice my glutes...I finally settled on a bag of peas, down my shorts, as I lay on my stomach reading the paper. I love ice.

So...over the weekend, I did manage to run 13 miles....but not all at once. I've got some concerns about this 1/2 marathon. I should have had plenty of time to be ready for it, but somehow I feel less ready than before the Nike Women's 1/2 in October. I'm hoping its all in my head, but the last two long runs have been really difficult.
Seriously Submitted by Aka Alice at 3:42 PM