I've never really tracked my monthly mileage before, but the Garmin makes it pretty darn easy (sorta)...I gotta figure out how to track my treadmill mileage more accurately.

The treadmill run mileage is an estimate...I have one Nike+ workout recorded which sorta corresponds to one of runs saved in the treadmill memory, plus there is one more short run afterward...so I'll go with those numbers. Come to think of it, I don't remember running much on the treadmill this month and my quick review of the Hefferblog supports that claim in that there's not much of me complaining about running with Dread. Sooooo

Yep...those rockin' bike miles all came from today because while Mik, Alberta, and BBJ ran the SuperRun 10K, and while Betty and Elsie ran on the bay, I rode around the bay on my bike.

I don't have any fancy sort of touring bike. I have a pretty standard Trek street/trail bike. It's a nice bike and all...but it's not meant for speed.

This is what I learned about me and biking today (and I have TONS to learn about biking)
We got a REALLY early start this morning. The track club was meeting at 6:30...an hour before the 7:30 am SuperRun started. Betty wanted to get there even earlier because she needed to talk to Coach Paul before the race, so I picked her up at 5:45 and we were at the start of the race at East Mission Bay as the race volunteers were setting up. 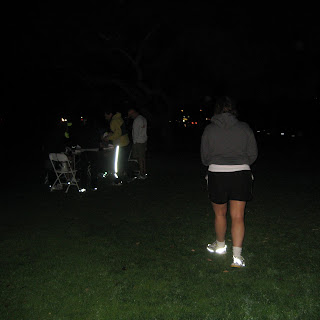 Betty...searching in the dark for Coach Paul...Even he wasn't there THAT early...the good news is that we were the first ones to use the porta-potties! A real thrill! 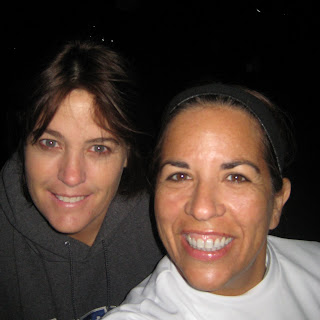 Betty explained to me that If I held the camera above our heads, we would stop having double chins in our self-portraits...who knew? I learn so much from that woman...I swear! 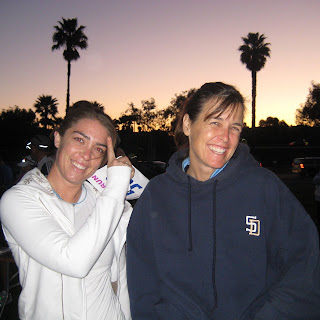 Mik and Kat showed up as the sun rose.
Since Elise wasn't running the race, Betty and I drove over to the west side of Mission Bay so they could run together and I would ride my bike. I decided to run around the entire bay...about 12 miles...I knew that if I rode around the bay, there was a chance that I could see some of my track club friends as they came off of Fiesta Island...

Here let me post a map so this all makes sense. 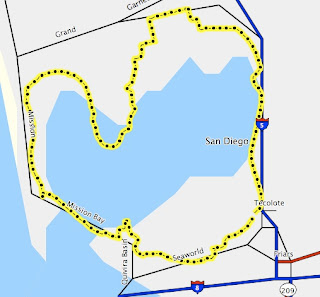 I'm not sure why it looks like I was riding in the middle of the bay, but it sorta gives you an idea of where I was...
I stopped riding at Fiesta Island (which doesn't show up on the map, but it's about where the I-5 symbol is) for a couple minutes to see if I could find any of the herd...I had really good timing. 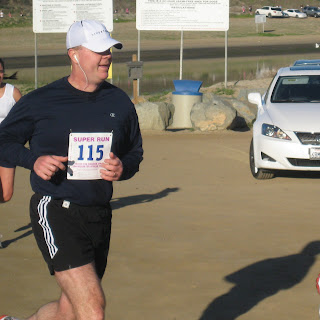 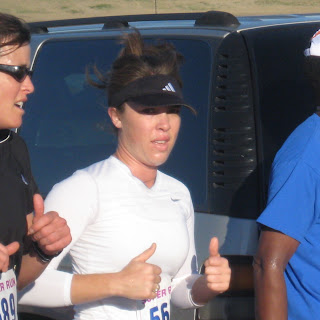 After I saw my friends, I continued on my ride and took some photos of the bay and the new walkway that's on the Seaworld side of Mission Bay. It was quite lovely. 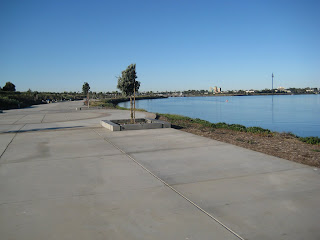 After our runs and rides, we all met up at World Famous for breakfast (and mimosas). For some reason I didn't take a picture of the group (I mean how many shots of us eating breakfast and drinking mimosas can I really post?).

I hear there's a football game tomorrow... Hope whoever your rooting for wins!
Seriously Submitted by Aka Alice at 8:52 PM