I don't even really know where to start with this week... I know I've been out of the loop for a few days...and then I wrote this rather esoteric post from Vegas with a sorta vague reference to going to doctor's appointments with my mom...
Here are the notes I took from the appointment. 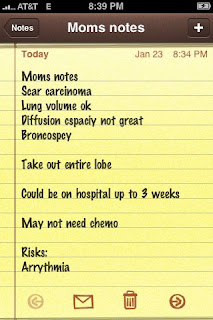 Cheery notes, huh?
That's what the doctor's appointment was about...my mom has lung cancer. I've known about it for a couple of weeks. So, I flew to Vegas for the day on Wednesdayday so that I could go with her to the appointment with the surgeon.

Actually, there's some good news (if there could be such a thing) and that's that they caught the lung cancer REALLY EARLY. If you've been reading awhile, you may remember that in October, I had a pretty wild trip to Vegas because my mom ended up in the emergency room. Turns out that all the tests she ended up taking to make sure that she WASN'T having a heart attach (she wasn't) turned up a small mass on her left lung....less than 3 cm. According to the doctors they almost NEVER see lung cancer at this early a stage unless it is found by "accident" because there are almost no symptoms. We're certain there are angels watching over mom.

I'm not sure what good I did being at the appointment, other than to hold my dad's hand, and try to crack the occasional inappropriate joke (my role in life). My mom on the other hand - she was completely amazing. She gave her whole medical history like clockwork. She knew dates and tests (PET scans, and MRIs and CT's and medications, and the dates of the tests, and lord knows what else. I usually get stumped by the "when was your last period?" question).

I do like the surgeon. She was matter-of-fact and thorough, and even managed to inject a little humor. When asked about previous surgeries, my mom reported that she'd had two c-sections, but that was a REALLLLLLY LONG time ago when she had me...to which the surgeon looked at me and responded, "well, THAT'S gotta make you feel good..." It was a nice time to inject some humor. We all needed the laugh.

Mom's going to have surgery week after next, which is scary, but the doctors have all been incredibly optimistic that they can get the whole mass in the surgery and that since the cancer has been caught so very early that its treatable and curable... some relief there, but it still sucks...a lot.

I'll probably be spending a fair amount of time in Vegas for the next few months...

Oh yeah...the hip and the Carlsbad 1/2 Marathon...which is this Sunday...so it really seems of little importance, but I know now more than ever how much I need running in my life because not being able to run has made me just a little nutty.... especially today when the promised physical therapist called to CANCEL my appointment. Can you believe that...he has me wait for the entire week to see him, then cancels at the last minute. I wonder if I'd be charged if I canceled at the last minute? I wonder if I'd have to wait a week if I were an elite athlete?

Luckily, there is the Internet and my local shoe store (Movin' Shoes is da best) to help me with my self-therapy. First, Vickie from "Living and Tri-ing in River City, sent me an email and offered to send me the stretches she does for her hip pain, which when she described it, sounded EXACTLY like mine. Then she sent me a really detailed explanation of the stretches. It's on my computer at work, or I'd post some of it here...BTW, describing how to do a hip flexor stretch with only words, and no pictures, is one pretty tough task, but Vickie described it perfectly. (I've been doing one where you lie on your back and grab an ankle and a calf...I'll have to post Vickie's description, but it is the best hip stretch I've ever done, but boy does it hurt...but it's a good hurt, not the bad-hurt that I've been having. She has a really funny post today about swimming with Tai-Chi guy...you should check it out.

Then the guy at Movin' Shoes told me about a few more stretches I could do and I bought The Stick for some hip massage. Then I went to Target and bought a tennis ball (it was one of Vickie's stretches) and a heating pad and some Epsom Salts. 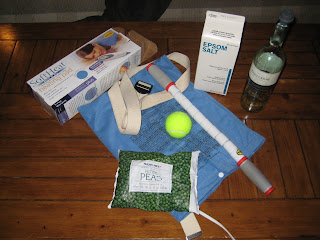 Who needs a physical therapist? I have frozen peas and The Stick!
I figure I have 33 more hours to stretch, heat, ice, stretch, soak, ice, massage, ice, heat, soak, and stretch, my hip into some kind of submission.

At this point, I know a PR is out of the question. I haven't run all week (well...I tried to run on Thursday morning, but it wasn't pretty) and to be honest, I don't really care about that. I may not even run the whole race, but I will be out there and I'm going to have a really good time, and I'm going to run for my mom. I know I'll get to meet up with Penny and Yasmin and maybe Lisa (so that when we run into each other at Lake BP, we'll recognize each other!) and of course I get to run with Betty and Mik and Edith. It'll be a good day.

Again, thanks for all your well-wishes for my hip and my mom in my last post. I know my mom occassionally reads my blog and we both really appreaciate all of the LURVE your sending our way.
Seriously Submitted by Aka Alice at 8:35 PM